More
Home Baseload Clean Energy Trends: The Future Is all About Deployment

2012 proved to be an unsettling and difficult year for clean energy. High-profile bankruptcies and layoffs plagued many clean-tech companies, overall venture investments retreated in the face of increasingly elusive returns, and the industry was begrudgingly transformed into a partisan wedge issue during the U.S. presidential campaign. But as we highlight in our just-released Clean Energy Trends 2013 report, the fundamental global market drivers for clean technology remain largely intact.

Intensifying resource constraints loom large. Unprecedented climate disruption in the U.S. and abroad is putting resiliency and adaptation front and center. And President Obama has signaled a strong commitment to expanding clean energy and energy efficiency in his second term, calling for another doubling of renewable power by 2020. Similar commitments exist in China, Japan, and the European Union.

The report found that lower prices for many clean-tech goods and services, combined with a renewed focus on scalable projects, resulted once again in record annual solar, wind, and biofuels deployment. Against this continued expansion, however, combined global revenue for solar PV, wind power, and biofuels expanded just one percent, from $246.1 billion in 2011 to $248.7 billion in 2012. This marginal growth was one of the many consequences of rapidly declining solar PV prices.

Some of the report’s key findings include: 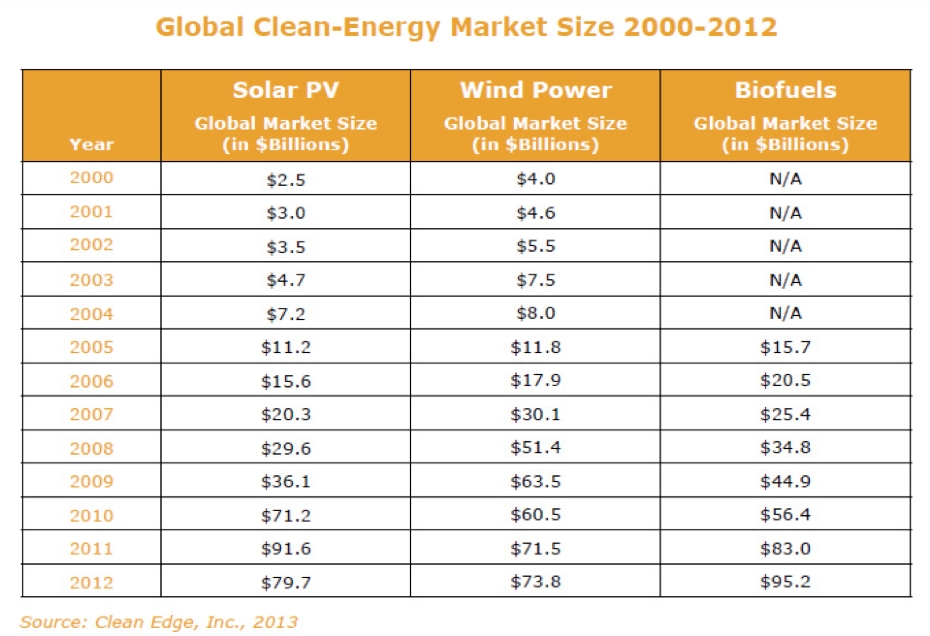 In many ways the shift to cleaner sources couldn’t be clearer. Renewables and natural gas made up more than 80 percent of new electricity capacity additions in the U.S. in 2012, with renewables coming in at 49 percent and natural gas at 33 percent. For the European Union, the renewables number is even higher, with solar in the driver’s seat. In 2012, newly installed solar PV accounted for 37 percent of all added capacity, followed by wind with a 26.5 percent share, and gas at 23 percent. In total, renewable sources represented more than 31 GW of the 44.6 GW of new generation capacity in the EU, roughly 70 percent of all new capacity for the second consecutive year.

Generating capacity is, of course, not the same as actual generation. But even in this regard, clean energy sources have moved past their days as rounding errors and are playing a significant role in meeting electricity demand in a number of global markets. Wind energy in Denmark blew past a 30 percent share of national electricity use in 2012, and an official target is in place to generate half of the nation’s power from wind by 2020. In Germany, clean energy already accounts for 25 percent of energy production — led by wind (9.2 percent), biomass (5.7 percent), and solar (5.3 percent) — and the country is aiming for 35 percent from renewables by 2020.

Clean energy continues to expand as a major economic force, with an increasing focus on deployment of readily available technologies. In early 2013, for example, Warren Buffett’s MidAmerican Energy Holdings expanded its solar portfolio with a whopping $2 billion acquisition of the Antelope Valley Solar Projects in Southern California, one of the largest utility-scale solar developments in the world. (Buffett’s investment in the Antelope projects came with long-term purchase agreements already lined up with Southern California Edison.) Google’s recent $200 million equity investment in a Texas wind farm pushed the tech giant’s ownership in solar and wind projects to a combined 2 GW, making it one of the largest renewable energy asset owners. And in January, car rental giant Avis Budget Group announced its plan to buy car-sharing pioneer ZipCar for $500 million, a promising reminder that new ways of thinking can be just as disruptive as new technologies.

What all this seems to point to is something we’ve talked about for years: the scale-up of clean-tech deployment. And it’s not just the big investors shifting their focus toward deployment. Mosaic, which we highlight in this year’s Trends report, is bringing solar deployment investment opportunities to small investors via a crowdfunding platform, offering annual yields of around 4 to 5 percent. And don’t forget the state-level Green Banks established in Connecticut and announced in places like New York and Hawaii or the prospects for new project deployment tools like real estate investment trusts (REITs) or master limited partnerships (MLPs).

Indeed, the near- to mid-term will be all about getting assets in the ground. That is where the action will be. It will take many shapes and sizes, from large corporate investments to crowdfunding and will span the globe from the U.S. to Japan.

This new focus on deployable and proven technologies reflects the maturation of an industry that was a mere blip on the economic radar just a decade ago, but today represents the largest slice of new electricity capacity additions in the U.S. and European Union. Even in pro-nuclear China, wind overtook the atom as a generator of electricity in that nation’s power mix in 2012. To ensure that clean energy keeps up its momentum, however, we’ll need new models and a leveling of the playing field — and that will take hard work, creativity, and, in the face of entrenched interests, a great deal of steadfast commitment and endurance.