Mitt Romney’s acceptance speech at the Republican National Convention last week ought to serve as an urgent wake-up call to anyone that cares about America’s energy, environmental, and economic future. At the podium, Romney chided President Obama on global warming, and his hoped-for GOP administration is advancing an “energy independence” plan built much more on the polluting industries of the past than the innovative clean technologies of the present and future. Somehow, global warming, renewables, and other clean-tech pursuits have become some of his favorite punch lines.

But clean tech is far from a laughing matter. Instead it’s the stuff of major multinationals such as GE, Toyota, and Siemens who are investing and making billions of dollars annually from their clean-tech initiatives; of startups including Tesla, SolarCity, and Agilyx who are respectively working to innovate electric vehicles, solar power finance, and plastics recycling; and of young Americans across our nation working to advance clean technologies, address climate change, and build thriving for-profit and non-profit ventures.

And contrary to what some would like you to believe, renewables energy production isn’t a marginal industry; it’s expanding rapidly in importance and penetration. In 2010 three states got more than 10 percent of their electricity generation from wind, solar, and geothermal. One year later, the number had doubled to six states including South Dakota and Iowa, which now generate approximately 20 percent of their total electricity from the wind alone. Clean tech isn’t shrinking; it’s starting to scale up to significant percentages for utilities, cities, states, and nations.

Perhaps this growth is exactly why some entrenched interests — and the politicians they fund — are working so hard to demonize clean tech, spread misinformation, and demoralize its supporters. But this partisan behavior overshadows a critical point: clean tech has historically been a bipartisan endeavor, and even to this day is supported by governors, mayors, and others on both sides of the political aisle. Even more important, renewables are overwhelmingly supported by citizens of all stripes and affiliations in poll after poll.

In our just-released book, Clean Tech Nation, which looks broadly at the entire clean-tech industry, Clean Edge senior editor Clint Wilder and I make the case for a U.S. energy future built on renewables, responsible natural gas, and efficiency. Our research shows that most of the developed world simply doesn’t need new coal or nuclear to meet their energy objectives. Instead, the world’s industrialized nations could pursue:

But what steps can enable such an advanced energy future, and how can the U.S. lead the way?

In Clean Tech Nation we offer a Seven-Point Action Plan for Repowering America that is bipartisan, grounded, and most importantly, we believe, achievable. Our plan’s supporters to date include a former oilman, a past president, current bank executives, nonprofit leaders, CEOs, and many others. It includes key action items that we believe can renew American leadership, and ensure the nation’s future economic competitiveness across the industrial spectrum, from energy and transportation to waste and water.

Our recommended actions are: 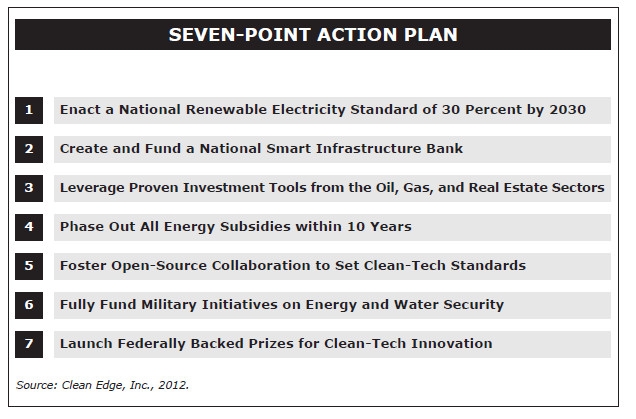 There are no silver bullets, no single actions that can guarantee success. It will take a diversified portfolio approach. But we believe that the U.S., perhaps more than any other nation, is in a unique position to lead in everything from new financial models for renewables and efficiency deployment to open standards for the smart grid and green buildings. We’ve done it before in the computer and Internet revolutions, and in rail, air, and space transportation. We can do it again if we have the leadership and the will.

At the national level, clean tech has become highly polarized during this election cycle. But, as noted earlier, multinational corporations, investors, and a crop of motivated innovators are aggressively exploiting the opportunities of cleaner, greener, smarter processes. At the local and regional level, mayors and governors, both Democrats and Republicans, are supporting the growth of clean-tech industries. And the majority of U.S. citizens believe that our nation’s future should be firmly planted in advanced energy technologies, not the polluting fossil fuels that powered the last century. For the sake of our nation, let’s hope that whoever is sitting in the White House in January 2013 will support the efforts of Americans across the country in moving forward, not backwards, and in emboldening America’s technology-driven, problem-solving culture. Nothing less than our nation’s economic competitiveness and the health of future generations relies on it.