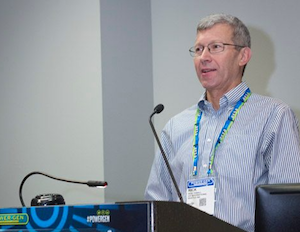 Attitudes to combined heat and power technology have transformed, according to speakers at the world’s largest electric power conference.

Chilkoot Ward, Director of Utilities at the University of Alaska told an audience attending POWER-GEN International 2017 that the technology is now gaining favorable attention, in stark contrast to its previous treatment.

“There’s been a change in the mindset of utilities,” Ward told attendees at the Flexible Generation & Onsite Power session. “CHP once stood for cancer as far as utilities were concerned but they’re now offering incentives to solve some problems. There’s been fundamental shifts and they are looking at more of a partner approach – changes are already happening for the good.”

Ward acknowledged there are barriers yet to be overcome if the technology is to rightly proliferate, and ‘fill the gaps’ produced by having a surplus of abundant renewable energy on the energy system.

He believes part of the problem is that CHP is not seen to be an equitable solution with conventional green energy techs.

“In Alaska I get a kick out of people getting excited about renewable projects that provide double digit efficiency improvements, but they’re confused because it’s not a solar panel,” he said. “That needs to be pushed on the regulatory and utility side.”

Earlier Thomas Drake, Regional Sales Gas Manager at MTU Onsite Energy had expounded on the benefits of CHP, and why its future looks bright in the US, and indeed worldwide.

He pointed out the positives in terms of spark spread analysis, energy efficiency gains and the general economics making CHP attractive. He also informed the audience of the array of assistance, analysis, government and utility support currently on offer to incentivize the deployment of CHP.

He mentioned Baltimore Gas and Electric as a good US representative example of the type of options available.

“There are three phases to that incentive design and it adds up to $75 per kilowatt, so for a 1 MW project, that amounts to $1 million in incentives for a well-designed CHP project,” Drake said. “There is currently 26,189 MW of potential for CHP across industrial sectors and for potential to match reciprocator-driven CHP in 47,995 locations.”

Drake used a beverage facility (bottling plant) in the Midwest as a reference case. Using CHP through a 3.5 MW reciprocating gas CHP engine would cost in the region of $5.1m in total project cost, leading to $78,000 in reduced costs per month. The fact that payback takes in the region of five years, rather than the two years owners customarily expect, is something the industry needed to overcome, he acknowledged.

Roland Keiss of MAN Diesel & Turbo was equally keen to demonstrate just how much potential there is for CHP in the renewable energy dominated era.

“In this paradigm shift in energy demand there is surplus renewable generation and no baseload at all,” he said. “It’s a huge (potential) market for CHP applications, with the gaps that renewables create.”

“60 per cent of energy is wasted in the US after electricity production, so there is room to do much more for CHP applications.”

Keiss added that the current scenario was being driven by prices, especially gas prices, and the message of ongoing gas prices rising is a consistent one.

As a reference case he gave the example of the Braunschweig CHP plant in Germany, where the technology has resulted in a 40 per cent cut in emissions, as well as cost reductions.

“People are getting smarter in how they purchase their power,” Keiss said. “The influx of renewables, uncertainty on the grid and costs are all feeding into it.”