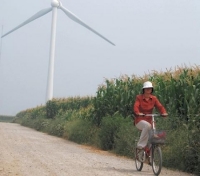 Beijing, China — The huge turbines at the Guanting Wind Farm are popular backdrops for photos of newly married couples who find the 60-meter-tall structures a symbol of modernity; an endearing addition to the distant mountains, corn fields and lake a few dozen kilometers outside bustling Beijing.

The hum of the spinning blades is the sound of China going green as it seeks to address the growing energy demands of its rapidly modernizing consumer society and fast-paced industrialization.

China was angered when the International Energy Agency recently named the country the world’s biggest energy user and emitter of carbon dioxide.

Hu says Chinese statistics prove China is not yet the world’s largest energy user.  She cites oil consumption figures as an example that contradict the IEA’s findings.

“We included the same data for all countries; we follow the U.N. agreed conventions and definitions,” Birol explained.  “This is data under primary energy sources of all the countries.  We have no problem whatsoever with any country arguing about the numbers.”

There is no denying hundreds of millions of Chinese are buying homes, refrigerators, TV sets, vehicles and other energy-hungry trappings of a consumer society.  It is routinely reported China relies heavily on cheap and widely available coal, the main resource that creates the rising carbon dioxide levels blamed for global warming and other environmental damage.

But only one third of China’s vast population is enjoying a modern lifestyle; hundreds of millions more consumers will be demanding energy in the years ahead.

China is building hundreds of coal-powered energy plants each year.  Coal fuels 70 percent of China’s energy consumption, making the country the largest consumer and producer of coal in the world.

Beijing has refused to agree to cap its overall growth in its consumption of fossil fuels or reduce its emissions of carbon dioxide and other greenhouse gases.

That frustrated U.S. President Barack Obama and other world leaders’ efforts to forge an international climate agreement at a U.N. summit in Copenhagen last December.

But the world’s most populous nation is also a leader in renewable energies.

The IEA’s Birol agrees that when it comes to going green, China is another world leader.

Zong says the farm was constructed to help clean up Beijing for the 2008 Olympics.  He says the farm helps ease Beijing’s reliance on dirty energy that creates the capital’s notorious smog.

In the wake of the global financial crisis, the Chinese government earmarked 14.5 percent of a $586-billion stimulus package to energy saving and green investments.

China has also attracted record investments from overseas companies in the past two years.

Yet traveling back to smog-bound Beijing, past industrial factories, high-rise apartment blocks under construction, shopping malls and the ever growing number of cars, the future once more looks uncertain.

How, one asks, will the government satisfy the energy demands resulting from the rising expectations of its 1.3 billion, consumer-hungry people?  A small part of the answer is already blowing in the wind.  But burning questions remain.