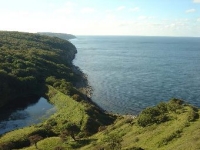 China’s first heating and cooling system to use seawater pumps is under construction in the northeast coastal city of Dalian and will begin operation this winter, according to China News Agency.

The system harnesses the energy released by seawater temperature differences to provide buildings with air conditioning and heating, bringing huge potential energy savings and environmental benefits. The project, located in Dalian’s Xinghai Bay Commercial District, is an initiative of the Iceburg Group, a local large equipment manufacturer. The first phase of the project will equip the district’s conference center and swimming pools with comfort heating over an area of 300,000 square meters. The second and third phases will supply neighboring residential areas as well, expanding the coverage to two million square meters. By using seawater-derived heating and cooling, China may be able to avoid large investments in power generation and electricity grids. The systems could also bring significant environmental benefits to the nation, which generates more than half of its electricity from heavily polluting coal-fired power plants. And the systems would help accelerate the phase-out of chemical refrigerants such as chlorofluorocarbons (CFCs) and hydro chlorofluorocarbons (HCFCs), whose release contributes to depletion of the atmospheric ozone layer. The potential for seawater utilization for heating and cooling is huge in China. In the Yellow Sea and Bohai Bay to the north, the lowest seawater temperatures in February remain above 2 degrees Celsius (degreesC), warm enough to operate pumps for heat generation. During the summer, temperatures 35 meters below the surface are at 12-14 degrees C. And in the South China Sea, year-round surface temperatures remain relatively constant at 28.6 degrees C, with deep-water temperatures dropping to 2.36 degrees C. While the Xinghai Bay project is currently attracting considerable support and investment, the real test will be its performance in the coming winter heating season. If successful, the pilot project is likely to be replicated in other coastal regions. China possesses more than 110,000 kilometers of coastline, studded by islands and peninsulas. These areas are home to numerous large cities, most of which have seen breakneck economic growth and skyrocketing demand for climate control in both commercial and residential structures.