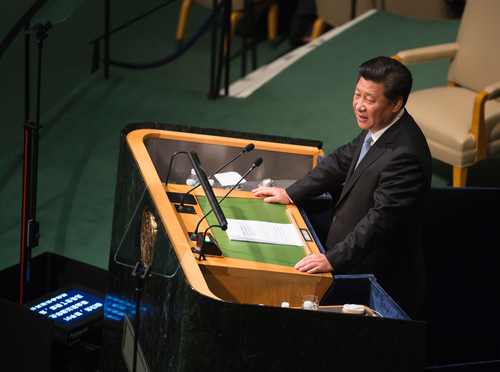 Global carbon dioxide emissions have been rising consistently year after year, but decreased for the first time in 2014, according to Fatih Birol, executive director and chief economist of the International Energy Agency.

Birol spoke highly of China’s contribution to addressing climate change: “Without China, the world would not have been able to make such achievements in the area of clean energy.”

Over the past five years, 40 percent of all newly added renewable energy power was generated by China, while the country’s investment in clean and renewable energy exceeded the combined total invested by Europe and the U.S.

As the world’s largest energy consumer, China sees the challenge presented by climate change as a historical opportunity in the transformation of energy development.

At the Asia-Pacific Economic Cooperation conference in Beijing last year, Chinese President Xi Jinping and U.S. President Barack Obama issued the U.S.-China Joint Announcement on Climate Change. The U.S. intends to reduce emissions to 26 percent to 28 percent below its 2005 level in 2025, while China intends to increase the share of non-fossil fuels in primary energy consumption to around 20 percent and achieve the peaking of CO2 emissions by around 2030.

Pan Jiahua, director of the Institute for Urban and Environmental Studies, Chinese Academy of Social Sciences, noted that Europe saw its CO2 emissions peak in 1990, while the U.S. achieved the peak in 2010. Nevertheless, the continued reduction in CO2 does not now solely rest on the shoulders of the developing world. Despite the reverse in course in most developed countries, emissions per capita are still three to five times those of developing countries.

“To reduce emissions, it’s not enough to reduce subsidies for fossil fuel production,” Jiahua said. “It is also necessary to change the consumer consumption habits.”

As an example, China has implemented the multi-step electricity pricing mechanism, which is proving more effective than eliminating the subsidies for fossil fuel production.

China is also investing heavily in the development of renewable energies. Last year alone, the country invested $90 billion, more than any other country. China is developing its solar power industry at a staggering speed, and has built a large number of solar farms in the Gobi Desert.

Lead image: Sep 28, 2015: President of the People’s Republic of China Xi Jinping speaks at the opening of the 70th session of the General Assembly of the United Nations Organization in New York Credit: Drop of Light / Shutterstock.com