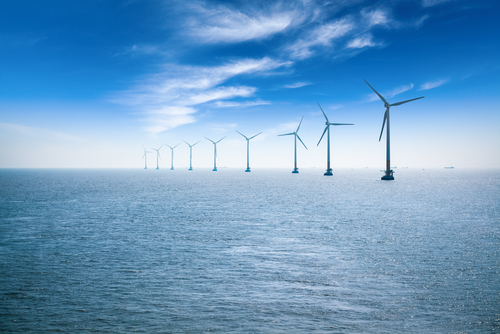 A document recently published by China’s State Council concerning the planned use of the ocean under the country’s territorial jurisdiction indicates that offshore wind power plants are slated to be located and built in the seawater adjacent to the coastal areas of northern Jiangsu province. Areas specifically cited in the document include those adjacent to the cities of Lianyungang and Yancheng. The specific mention of such a plan in a document issued by the highest administrative authority of the country is a clear signal that the country is serious about developing offshore wind power on a large scale.

Jiangsu province boasts 954 kilometers of coastline and is located in an area rich in wind energy resources. The 6,000 square kilometers of sandy beaches that align the province’s coast account for one fourth of China’s total. In addition, the more than 70 sandbanks lying off the province’s coast are capable of supporting and deploying a wind power capacity of 970 GW. As of 2010, Jiangsu province had already deployed 4.6 GW in offshore wind power capacity, ranking the region first in Asia in that regard. A study indicates that the province is home to 34.7 GW of wind energy resources in total.

The province sits on 21 GW of developable coastal wind power capacity, with 14.7 GW or 70 percent located in and around the city of Yancheng (including 1.7 GW onshore and 13 GW offshore). One of the eight 10 GW wind power facilities planned in China is to be located in Yancheng. Asia’s first 3 MW, 5 MW and 6 MW wind turbines were all manufactured there. The National Center for Research and Development of Offshore Wind Power Technology and Equipment will be completed and put into operation soon, and the National Wind Power Equipment Quality Supervision and Inspection Center is also under construction in the city.

The area running along the coast under the jurisdiction of Yancheng includes 582 kilometers of coastline, and 4,550 square kilometers of sandy beaches, accounting for 75 percent of the province’s total. As of 2011, the city had deployed 700 MW in onshore wind power capacity and initiated 26 wind power projects with an overall investment of 15.2 billion yuan (approx. US$2.4 billion). The city’s new energy industry recorded sales of more than 10 billion yuan (approx. US$1.6 billion) in 2011. At present, Yancheng is pushing ahead with its first four offshore wind power franchise projects, in Binhai, Sheyang, Dafeng and Dongtai counties, as well as the construction of three demonstration offshore wind power plants. The seven projects have a combined capacity of 1.7 GW and direct investment of 30 billion yuan.

Geographical limitations imposed by the existence of areas allocated strictly for military use, ports, shipping lanes, enclosures of tideland for cultivation and protected zones