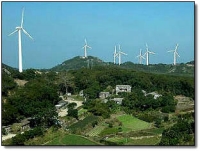 Beijing, China [RenewableEnergyAccess.com] It’s official. With the recent passage of China’s new Renewable Energy Law, one of the world’s largest economies has now made one of the largest state-sponsored commitments toward renewable energy. China’s government imposed a national renewable energy requirement that is expected to boost the use of renewable energy capacity up to 10 percent by the year 2020.

Eighteen months ago the country announced an interest in developing the legislation and wasted no time crafting and implementing it. The Standing Committee of the National People’s Congress (NPC) endorsed the Renewable Energy Law on February 28, significantly earlier than expected. President of the People’s Republic of China Hu Jintao signed and announced this law. Effective next year, the law requires power grid operators to purchase resources from registered renewable energy producers. The law also offers financial incentives, such as a national fund to foster renewable energy development, and discounted lending and tax preferences for renewable energy projects. Rapid economic development throughout China has resulted in a significant increase in energy consumption, leading to a rise in harmful emissions and power shortages. The Renewable Energy Law is designed to help protect the environment, prevent energy shortages, and reduce dependence on imported energy. China’s new law sets the stage for the widespread development of renewables, particularly for commercial scale renewable generating facilities. Through this legislation, the State officially encourages the construction of renewable energy power facilities. China’s electricity grid is obligated to purchase all the electricity generated by approved renewable energy facilities located in its service area. The grid’s buying price for renewables will be set by the National Development and Reform Commission (NDRC), a regulatory department of the State Council. NDRC will adjust the buying price from time to time as necessary. The cost of purchasing this power will be spread across all customers on the grid. NDRC will also implement a national renewable energy plan, including specific renewable energy targets that will act as the framework for implementation of the law. Provincial planning agencies will then develop their more specific implementation plans. The law includes other details related to the purchase and use of solar photovoltaics (PV) and solar water heating as well as renewable energy fuels. Finally, the law includes specific penalties for non-compliance with the law. In 2003, China’s renewable energy consumption accounted for only 3 percent of the country’s total energy consumption. The government plans to lift up the figure to 10 percent in 2020. According to the law, renewable energy includes hydroelectricity, wind power, solar energy, geothermal energy and marine energy, all of which should be taken consideration in state and local development plans. Representatives from Greenpeace have already applauded the move. “China could and should be a world leader in renewable energy development,” Yu Jie, Greenpeace energy policy advisor in Beijing told China Daily. “If the definition of renewables and the details are right then the international community will get behind China and support its ambition to become an international clean energy powerhouse.” The U.S.-based Center for Resource Solutions, a renewable energy organization in the United States has been working in China for five years on renewable energy and energy efficiency policy and expects the new law to make a big difference. Jan Hamrin, Executive Director of the Center for Resource Solutions, said China’s law serves as a model for other countries to follow in national commitment to renewable resources. She expects the country’s commitment to clean energy to lead to continued economic growth, cleaner air for Chinese residents, reduction in greenhouse gases, and technological progress. “Passing such comprehensive renewable energy legislation is a remarkable feat for any country,” Hamrin said. “Passing one this rapidly is almost unheard of and reflects support for the law by China’s top leadership.” A copy of the law (unofficial, English translation) can be downloaded from the link below, courtesy of the Renewable Energy and Energy Efficiency Partnership (REEEP), a coalition of governments, businesses and organizations committed to accelerating the development of renewable and energy efficiency systems (REES).