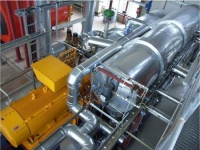 Texas, USA — Waste heat and low-temperature geothermal are hot sources of renewable energy that get a boost from Organic Rankine Cycle (ORC) systems.

In Brisbane, Australia, a 240-kW ORC unit at a timber plant will soon harvest heat from an existing biomass burner and generate electricity to power kilns for drying lumber. Similar ORC systems are becoming killer add-ons for other heat-based renewable energy plants, including concentrating solar and utility-scale geothermal systems.

“People are realizing now that, if you throw away heat, you’re throwing away money,” said David Paul, international business development manager for Pratt & Whitney, which designed the system for the Gympie Timber Company in Australia.

The ability to use lower temperature fluids make the ORC systems ideal for harvesting heat from industrial exhaust systems. They are typically configured with the following components:

Pratt & Whitney is among the growing number of companies trying to introduce ORC en mass to the United States market. ORC systems have been generating heat and electricity with woody biomass sources for 20 years overseas. Europeans have embraced combined heat and power (CHP) ORC plants (such as the one in Australia) because they can operate with at to 85 percent efficiencies.

“When you look at the stacks on a nuclear plant or coal plant, they’re releasing all that excess heat into the atmosphere, so they’re only 20 to 30% efficient,” said Bob Larson, CEO of Pennsylvania-based 1st Renewable Energy Technologies. “An ORC captures that excess heat, making 85% efficiencies possible.”

Europe has 120 to 150 ORC CHP plants with capacities of multiple megawatts. Many use waste wood as biomass feed sources. Larson said environmental concerns, coupled with high fuel costs, jump-started Europe’s investments in ORC plants in the 1980s. His company has formed a partnership with Maxxtech AG, one of Europe’s leading ORC manufacturers, to target the American market, where cement plants and other industrial facilities have been capturing waste heat for years.

Paul said Pratt & Whitney has received a notable increase in inquiries about ORCs as waste heat has become a hot topic over the past year. The company, a division of United Technologies, recently sold a unit to the city of Albany, New York. Similar systems are also marketed by geothermal heavyweight Ormat Technologies Inc.

Challenges remain in expanding ORC use in the United States, especially when retrofitting at industrial plants. In many configurations, the ORC itself is only 50% of the total installation costs, which include heat transfer equipment and condensers to cool the systems.

“A lot of times there have to be incentives in place [to make the economics work],” Paul said.

Incentive programs have helped his company’s ORC business expand to in India, Thailand and Indonesia.

“There’s talk about 50 MW biomass plants in the U.S., but you kind of shoot yourself in the foot if you need to truck in biomass from 100 miles out just to fuel [the plant],” he said. “Smaller plants allow for more sustainable forestry.”