More
Home Baseload Can We Reduce the Ecological Risks of Extended Bioenergy Production? 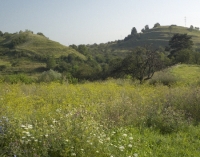 For years experts have discussed the ecological impact of the extended cultivation of energy crops. Scientists have now developed a computer model that allows assessing the impacts and comparing the effectiveness of strategies for the reduction of risks for biological diversity. Conclusion: The extension of bioenergy leads to problems to biological diversity in agrarian regions. With different accompanying measures, such as the conservation of near-nature areas, however, these effects could be partly reduced, as scientists of the Friedrich Schiller University in Jena and the Helmholtz Centre for Environmental Research (UFZ) write in the current issue of the professional journal Global Change Biology Bioenergy.

Of particular importance in this context is fallow land. At the latest since the abolition of the EU-wide set-aside premium in 2009 due to the overall rising demand for agricultural products, fallow land is strongly declining and re-used for intensive agricultural production. Ecologically speaking it would be more meaningful, however, if at least part of the land would be kept off from agricultural use also in future and preserved as fallow land and field margins. “These areas have not only a high value for nature conservation and climate protection. They can also help to buffer unintended side-effects of the extension of bioenergy and thus to prevent external costs.

The model analyses therefore yielded not only ecological, but also new economic arguments for the preservation of fallow land and field margins that ought to be taken into consideration in the current debate on the concept for a green economy and the new regulation of EU agricultural policy”, emphasises Professor Karin Frank from the Department of Ecological Modelling of the UFZ. “The proposal of the EU to keep seven per cent of productive agricultural land nearly natural is currently being discussed controversially.  The term ‘ecological priority areas’ refers to all extensive, nearly natural areas, such as fallow land, hedge areas, orchards or land strips along water bodies”, explains the environmental lawyer Dr. Stefan Möckel of the UFZ.

The recently published study investigated different scenarios for the extension of bioenergy in a newly developed computer model to gain a better understanding of the complex relationships at the regional landscape scale and to identify and analyse the resulting ecological risks. Different variants of accompanying nature conservation measures were also investigated in order to develop options for the reduction of the risks.

For the example of the Eurasian Skylark (Alauda arvensis), it was shown with the help of this computer model that typical consequences of the extended cultivation of energy crops, such as the thinning of the spectrum of cultivated crops and increasing spatial agglomeration to large-scale monocultures, can have negative effects on the field bird populations. These tendencies in today’s intensive agriculture can be partly counteracted by the preservation of remaining nearly natural areas and field margins. However, it was also shown that both the extent of the resulting risks and the effectiveness of the counteracting conservation measures depend upon the structure of the particular agricultural landscape and the size of the fields. The larger and more homogeneous the landscape, the more important is the conservation of highly diverse nearly natural areas and field margins.

The Eurasian skylark is the most common open land field bird in central Europe. The intensification of agriculture in recent years has resulted in a decline of around one third in their numbers. “The Eurasian skylark is a type of indicator for the ecological state of many regions used for agriculture, because they have settled in different areas of this intensively utilised open land, bred over many months on the ground in fields and fed on mainly insects and, additionally, the seeds of wild herbs and grains found there”, explains Jan Engel, the first author of the UFZ-study, who is working at the University of Jena in the meantime.

“This bird species is representative for important areas of the agrarian ecosystem. An improvement in the habitat quality for the skylark would therefore also support vegetation, insects and other ground-breeding bird species”. In addition to the Eurasian skylark (Alauda arvensis), the researchers are currently investigating the effects on other field birds such as the Yellow wagtail (Motacilla flava) and the Corn bunting (Emberiza calandra) with their model in order to be able to make more extensive statements in future.

“The results of our study are a contribution to the debate about the ecological impact of extended bioenergy production. They underscore the need to adapt accompanying nature conservation measures to the regional conditions where possible”, concludes Professor Andreas Huth from the UFZ. For the evaluation of the impact of bioenergy, the researchers therefore recommend also to take the differences in regional landscape types, such as the mean size of fields, into account. Above all, they underpin the importance of creating incentives for the preservation and establishment of ecological priority areas, such as fallow land, in the context of the impending EU agricultural reform.

The full paper can be found here.

Jan Engel, Biologist, is working on his PhD at the Friedrich Schiller University of Jena. For his diploma thesis he joined a project funded by the “Federal Agency for Nature Conservation” that investigated nature conservation requirements for biomass production.