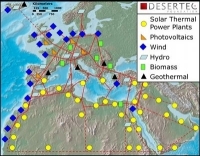 Some of the ideas taking shape across the globe about a comprehensive, continent-wide energy landscape of the future deserve serious attention in North America — namely, a supergrid of concentrated solar arrays. But will technical challenges be overcome only to crash against bureaucracy and self-interest?

Ideas are taking shape in Europe, the Middle East and North Africa (EUMENA) for a truly comprehensive, continent-wide energy landscape of the future. And some of the strategies coming out of planning bodies “over there” deserve serious attention on the North American continent. They also deserve a more liberal and disinterested response from legislators and regulators at the local level than these officials have historically been wont to give. And that makes us wonder whether we can rise above the technical challenges involved, only to drown in a sea of regulation and self-interest.

The Trans-Mediterranean Renewable Energy Cooperation (TREC), an initiative of The Club of Rome non-governmental global think tank, has developed a concept known as DESERTEC, whose main elements include:

The TREC group (now the DESERTEC Foundation) has calculated that an amount of electricity equal to the total present usage of the EUMENA region could be generated in this way if less than 0.3 per cent of the Sahara Desert was covered with CSP plants. And on a larger scale, the DESERTEC Foundation envisages a supergrid running from Iceland to the Arabian peninsula, from the Baltic Sea to the west coast of Africa, in which offshore wind and wave farms, photovoltaic sites, tidal stream generators, biomass, geothermal and hydroelectric stations would unite with desert CSP arrays to meet the region’s actual daily and hourly demands over an HVDC network of unprecedented size.

Besides the effectively unlimited solar power resource represented by the deserts, the key to the supergrid’s success lies in the ability of an HVDC line to transmit power with losses of only about 3% per 1000 kms, plus total AC/DC conversion losses of about 1.5%. So power generated in the western Sahara in mid-afternoon would be available to customers in Palestine as evening twilight draws on-in other words, at the same instant.

Unsurprisingly, DESERTEC notes that considerable public support, via taxes or market mechanisms, will be needed in the evolutionary stages of the supergrid, but that this will decrease as the cost of CSP-based electricity falls with economies of scale and technology refinements. Meanwhile, fossil-based and nuclear power will become increasingly expensive; in fact, the DESERTEC Foundation projects that, as the supergrid matures, there will be no need for new nuclear power stations, and existing ones can be phased out.

Advantages of CSP and the supergrid

One of the attractions of CSP is that solar heat can be stored relatively cheaply in media such as molten salts, allowing electricity generation to continue at night or on cloudy days. Also, gas or biofuels may be used as a backup source of heat when there is not enough sun. This means that CSP plants can provide any combination of baseload power, intermediate load and peaking power, a degree of flexibility that’s very useful to power engineers in matching variable supplies to constantly varying demand. By contrast, nuclear power is an inflexible source of power that can’t respond quickly to peaks or troughs in demand.

CSP can also provide useful side-benefits. Waste heat from the plants can be used for desalination of seawater, and the shaded areas under the collectors can be used for horticulture with the help of this supply of fresh water. In this way, desert countries hosting the CSP installations can alleviate their own shortages of water, food, usable land and, of course, energy.

Quite apart from the transmission of CSP electricity, supergrids have several other benefits. The wind may stop blowing in one spot, but it’s almost always blowing somewhere across a wide area like EUMENA. So a large-scale grid can largely eliminate the variability of a source such as wind power. It adds to the security of electricity supplies because a shortfall in any geographic area can usually be met from one or more other areas. And it reduces wastage by moving excess power in any area to areas where it’s needed.

And what, then, are the lessons for us on the North American continent? Could we create a supergrid to collect all the power generated by available renewable resources and supply it to everyone from Cape Barrow to Quoddy Head?

First things first. How much renewable energy is there, and where is it? On the solar side, it’s been estimated that a ninety-mile-square area of desert in one of our southwestern states could host enough solar power assets to meet our present electricity needs. It’s also been estimated that there are sufficient wind resources off our coasts and in the mid-west to do the same job, and that marine renewables and geothermal energy can make significant contributions to the mix.

So we have enough potential renewable resources, in aggregate, to satisfy our gross electricity needs. Besides building these resources out, however, our greatest unmet need is for a North American version of that EUMENA supergrid: a high-voltage (in the order of 765 kilovolts) DC grid that would unite the remote areas of energy production with the population centers in need of electricity. As Tom Starrs, CEO of Solar Energy Ventures, says: “[efficient transmission] is the biggest short- to medium-term barrier to the continued rapid growth of utility-scale wind or concentrating solar power and concentrating PV.”

Why should it be so difficult to take electrons from where they’re generated and send them to where they’re needed? Technically, it shouldn’t be. Even over long distances, as we’ve indicated, DC lines can feed power to load centers with relatively small losses. Aren’t we just talking about building pylons and stringing them together with wires?

If only it was that easy. The truth is, our national grid is anything but national. It’s really an amorphous collection of regional service territories, some as small as towns, others spanning several states, somewhat inelegantly shunted into three regional grids-the Eastern Interconnection, the Western Interconnection and ERCOT, the Texas grid. As Thomas Friedman puts it in his book Hot, Flat, and Crowded:

There is surprisingly limited integration between these regional grids and even between the individual utilities within each region… It is very difficult just to move electrons around within regions. Imagine trying to drive even from Phoenix to Los Angeles only on local roads, and you have an idea of what it is like to try to move electrons generated at wind farms in northern Arizona to markets in southern California.

So creating this supergrid will be like stitching new panels onto an existing patchwork with little regard for aesthetics, since we’re trying to create, in effect, a completely different pattern. But believe it or not, the technical challenges may pale compared to the legal and administrative ones. The notion of energy rights-of-way marching across town lines, county and state boundaries and private and public land alike raises prospects of endless permitting battles, public hearings, citizens’ group opposition and court battles. The task of bringing clean energy from where it’s found to where it’s needed could turn into our version of the Thirty Years’ War. (But see this RenewableEnergyWorld.com story for one idea that could turn some of the swords into plowshares).

Given its nationwide nature, you might consider this an ideal task for federal authority. And there is even a federal authority whose terms of reference cover these issues: the Federal Energy Regulatory Commission (FERC). But interviewed on NPR’s On Point on March 17, FERC Chairman Jon Wellinghoff agreed that FERC could not “steamroll the states.”

“We need to involve them,” he said. “But, on the other hand, if you have an interstate transmission line that’s set up for a national public purpose… and we have one state standing in the way, we need to have some way to overcome that.”

The acting chairman, when pressed, said that he thought states would be more accepting of federal authority if it were over the issue of a national policy to deliver clean energy to load centers. But FERC was recently dealt a blow by the Fourth U.S. Circuit Court of Appeals, which ruled that the agency had overstepped its congressional mandate in asserting federal authority over the siting of a transmission line for congestion relief purposes. It’s an ominous precedent, especially when combined with the knowledge that legislators at all levels tend, when asked to widen their horizons, to strap on blinkers instead; it’s not easy to forget Mary Landrieu of Louisiana being the only Senate Democrat to vote against cloture on the energy bill tax title in December 2007 for transparently parochial reasons.

So will state-against-state and state-against-federal bickering drag the entire enterprise down in the name of states’ rights? Will state and local permitting authorities refuse to play nice with their neighbors for two years at a time, then cry foul about federal interference when FERC finally enters the fray? We’ve noted before at Solar Nation that our American system of government, in which legislators’ relationship to the people is defined and restricted by state, district and even ward boundaries, may work well in elevating and defending local concerns; what it does not do is to encourage politicians to think first of the overarching, long-term national (not to mention global) need to reinvent energy, then work on aligning their constituencies’ assets and needs with that greater need.

This is not to say, by the way, that the Europeans have it all figured out, although resistance there seems to be based on commercial enterprises trying to protect their markets rather than on individual nations circling their own wagons. Dr. Gerry Wolff, Coordinator of DESERTEC-UK, whose web site gives an excellent description of the DESERTEC concept, says:

“The creation of a single market for electricity throughout EUMENA means unbundling power generation from power transmission. It should be possible for any customer in EUMENA to buy solar power from any supplier throughout the region in the same way that anyone in the UK can buy electricity from any UK supplier.

“Both the British Government and the European Commission are in favor of this kind of development within the EU. But there is some resistance from commercial interests that currently enjoy monopolistic benefits from the vertical integration of power generation with power transmission. And although a single market for electricity within the EU would be a great help, it would be even better if it were extended to the whole of EUMENA.

“An HVDC supergrid will be needed for the proper working of that single market for electricity.”

So if the European supergrid stumbles, it may not be because all those sovereign countries who’ve been bashing each others’ heads for a thousand years can’t agree on what’s best for the whole. They seem to have come to grips with that concept; shouldn’t we expect at least the same from our apparently united states?

It’s encouraging, at least, to see that the Obama Administration recognizes the need for a robust nationwide electrical transmission infrastructure, having allocated $6.5 billion to it in last month’s economic stimulus package. What would be discouraging would be to find, years after clean electrons could have been zooming toward load centers from CSP plants in the southwest and wind farms off the Maine coast, that objections are still being raised to the proposed seating arrangements for town-level initial public hearings on the supergrid.

This article was originally published by RenewableEnergyWorld.com.