More
Home Baseload Can Gigawatts of Geothermal Save the Salton Sea?

New Hampshire, USA — Famously known for its rise and fall as a resort destination in the 50s and 60s, The Salton Sea area in California has struggled to find support for revitalization efforts. After all, the lake’s high salinity makes it nearly impossible for sea life to prosper, and as water levels continue to diminish, the exposed sea floor further contaminates the arid, stale air. However, there is one industry that is eager to take advantage of what seemingly little the area has to offer — geothermal. Under the surface of that toxic seabed are thousands of megawatts of potential.

The Geothermal Energy Association (GEA) has had its eye on the area for some time, and today announced that it has joined forces with the Imperial Irrigation District  (IID) to support renewable energy development in the region.

The district has more than 2,900 MW of geothermal resource potential, and as the sea continues to recede, the potential grows, according to a recent report released by the GEA.  The IID believes these resources can be developed incrementally by 2032. “Not only is there more geothermal generating capacity in the Imperial Valley than anywhere else in the U.S., but geothermal energy can be produced with minimal impact on landscape and habitat,” according to the IID. Of course, as is the usual story when it comes to geothermal development, there are some barriers to overcome first.

The major problem to overcome is lack of transmission. Since the Salton Sea is fairly isolated, the IID estimates about 150 miles of transmission line is necessary. “[Transmission] has always been the problem with the Imperial Valley,” said GEA executive director Karl Gawell. “Our problem isn’t getting power from Wyoming to California — we can’t get power from California to California.” 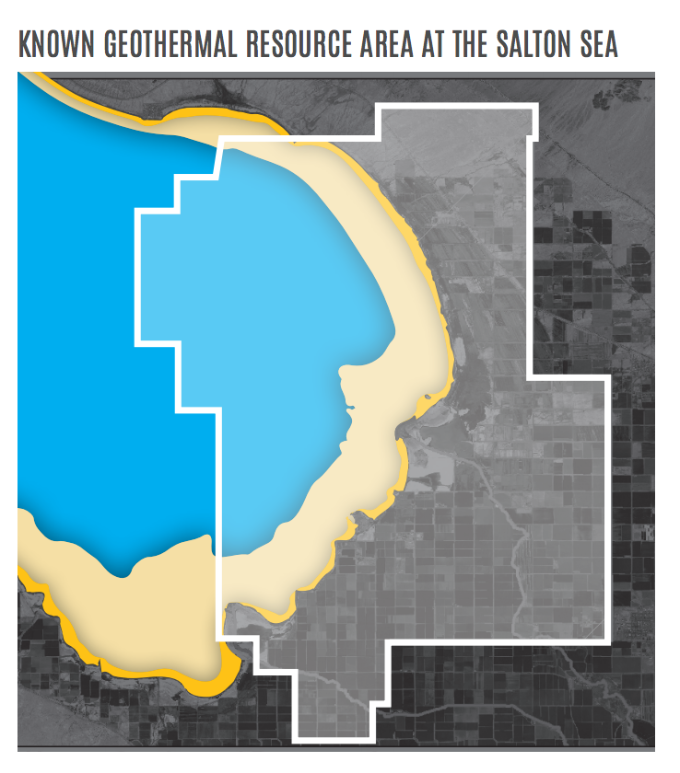 Several other barriers to development include lengthier permitting process due to the delicate, changing environment, lack of power purchase agreements and weak demand. However, the geothermal industry is hopeful that the state will come to truly recognize the technology’s reliable baseload potential and consider it an important piece of its Renewable Portfolio Standard (RPS). And with California’s nearby San Onofre nuclear plant offline and several coal plants nearing retirement, Gawell believes this is the perfect time to shine a light on geothermal’s baseload clean energy resource potential.

If and when these barriers are overcome, geothermal has much to offer the long-suffering community. Not only will project development create thousands of construction and permanent jobs, it will also provide stable, affordable power and aid in the area’s environmental restoration and conservation. According to the IID, the “the Salton Sea Restoration & Renewable Energy Initiative…will leverage funds generated by new renewable energy projects located at the sea to help finance activities for air quality management and habitat restoration.” Geothermal development will also reduce the amount of toxins released by the exposed seabed, thereby improving the area’s air quality.

“IID moving forward with this big new initiative for geothermal as part of the Salton Sea Restoration effort is really exciting to a lot of people because it could also open up the Salton Sea economy by helping build transmission that is desperately needed in the Imperial Valley,” said Gawell. “Not only will they get more geothermal, but they will be addressing a huge environmental problem that Southern California has been dealing with for decades. If they are successful it could really change the game in California.”