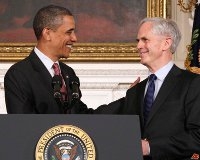 The big question today is whether Brightsource chairman John Bryson (right) can turn down the partisan heat over renewable energy in his new role as President Obama’s Commerce Secretary.

Early signs point to no.

Republicans say they will block the nomination – the only good news here is that the block has nothing to do with the merits. Still, House Oversight and Government Reform Chair Darrell Issa has attacked Bryson directly, calling him “out of touch,” a “green evangelist.” Issa wants more aid to the oil industry and no aid to renewables.

It would be funny if Issa weren’t serious. A former head of Edison International, parent of California’s largest utility, and a senior advisor to the Kohlberg, Kravis & Roberts private equity firm, is a “green evangelist?” A board member of the Walt Disney Co.? (Come to think of it – “green evangelist” sounds like a Disney movie.)

It does seem that, at least rhetorically, Republicans are doubling down on fossil fuels just as renewable sources start to make their economic case. This week, House Republicans actually voted to cut energy efficiency and renewable energy budgets by half, while increasing support for nuclear weapons research.

Not all executives in this industry are Democrats. Ethanol entrepreneur Bruce Rastetter is apparently a big Republican contributor, who seeks government aid to build ethanol infrastructure and more ethanol-friendly vehicles. Iowa, where the first Republican Presidential primary will be held next year, is a big ethanol state.

You can also argue that this is much ado over very little. While Washington thinks all this bickering is going to kick this industry in the teeth, the fact is the best subsidy we have is the current price of oil, which is making all sorts of solar, wind and biomass investments look better. Bryson can probably do the industry a huge favor by highlighting such investments, which may be one reason he was nominated, but so can the rest of the industry.

Something else those in the industry can do is to stand up and be counted, especially if you’re a Republican. All the rhetoric about eliminating government aid for renewables while “increasing domestic drilling,” supporting hydraulic fracturing and building shale oil plants can’t be sitting well with you.

Maybe it’s time you made your case.