The national conversation rightly oscillates at present between the issue of health insurance reform, which the uncertainties of Congress’s ways has made urgent at this inconvenient moment, and the issue of job creation, which the cruelty of economic fortunes has made urgent at this hungry moment. Waiting in the wings is the issue that will be impacting the nation and the nation’s economy long after these hard times have turned around and many more economic cycles of expansion and recession have come and gone.

A New Energy economy is struggling to be born in the U.S. despite the distractions of other issues and the best efforts of recalcitrants and naysayers to cling to fossil fuel spew and Old Energy ways. It will be based on the generation of emissions-free energy from ever-renewable sources. Because the fossil and toxic Old Energies will not willingly resign the subsidies on which they depend, the New Energy economy is being born slowly and is struggling to hold onto its meager incentives and subsidy supports.

Slow growth makes New Energy look profoundly inadequate to the task of taking over the huge responsibility of keeping the nation’s lights on and getting the nation’s citizens where they want to go. But there is a partner for New Energy that can maximize its benefits, lower its cost and supply revenues to build it faster: Energy Efficiency (EE).

The fundamental premises that make EE so crucial to the advancement of New Energy (NE) are (1) it costs much less to save energy (negawatts) than to generate it, and (2) the savings from generating negawatts can go to the building of New Energy infrastructure, allaying the necessarily burdensome costs of replacing Old Energy’s established infrastructure.

EE offers still other opportunities ideal for this tempestuous historic moment. As detailed in Building On The Success of Energy Efficiency Programs To Ensure An Affordable Energy Future; State-by-State Savings on Residential Utility Bills from Aggressive Energy Efficiency Policies from the Consumer Federation of America (CFA), Energy Efficiency supported by effective federal and state policies will also address the economic stresses now burdening the nation’s families through utility bill reductions of hundreds of dollars a year, perhaps enough to pay a month’s health insurance premiums. ::continue:: 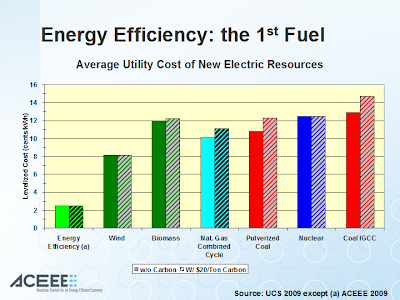 In addition, as detailed in a new analysis from the American Council for an Energy Efficiency Economy (ACEEE), current federal proposals now pending in Congress could create 330,000 new jobs in EE this year and another 184,000 next year. These promise to be good quality jobs doing the work the nation needs done, paying salaries the nation’s working class urgently needs and likely to come with benefits like health insurance coverage that the nation’s workers are losing all too quickly.

Due to the ongoing absence of cooperative effort in Congress, it is possible there will be no energy and climate legislation this year. Perhaps the universal and affordable benefits that come from EE policies offer a common ground where legislators can take a stand, serve their constituents and begin to remember that, in the face of the challenges before us, there really are no red states and no blue states but only the energy-wasteful United States and it needs to become as energy efficient as possible as it grows toward a New Energy economy. 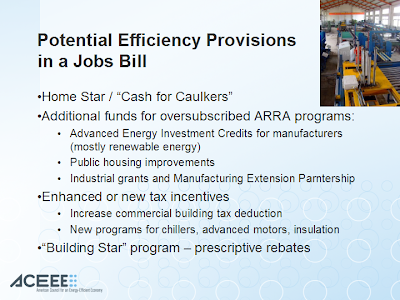