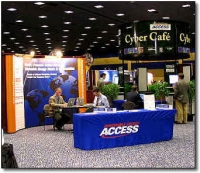 Las Vegas, Nevada [RenewableEnergyAccess.com] With 106 different companies exhibiting at this year’s PowerGen renewable energy conference it’s challenging for RenewableEnergyAccess.com to cover all the companies and their products in an equal light. Major fixtures in the renewable energy industry like GE Energy for wind power and BP Solar for photovoltaic power (PV) were there, but in this article I want to share something different. The following snippets, including photographs, offer a brief overview of some lesser-known companies or products that were shown at the industry-wide trade show. These companies all occupy their own niche in the clean energy industry and are either offering a new product, a new approach, or simply caught my eye among the many worthy exhibitors.

Solar PV from Spheral Solar Power Perhaps one of the catchiest products at the conference was the PV offering from Spheral Solar Power, which the company hopes to release into the cutthroat PV market by this summer. Their approach can best be described as a balance between the cost savings and cell flexibility of polymer thin-film PV but coupled with the relatively higher cell efficiencies of crystalline silicon solar.

Comprised of thousands of silicon spheres and bonded onto two, flexible aluminum substrates, the company’s cells are assembled into lightweight modules of varying sizes that can be applied to any surface. There are approximately 20,000 of these tiny spheres in an average 6-inch by 6-inch cell which, according to company representatives, averages 10 percent efficiency per cell. The three production examples on display included a packaged, flexible sheet to provide auxiliary power for sailboats, individual PV roof shingles and two modules consisting of 6-inch cells strung together in series. The company has just completed a 20 MW annual production facility in Cambridge, Ontario, Canada and expects to quickly double the output once the market will bear it — which of course, they are hopeful for. BIPV from Solar Solutions Another solar PV company leveraging a different approach is the Manitoba, Canada based Solar Solutions company which targets the promising building integrated PV industry (BIPV). Traditional solar products, both PV and solar hot water, are typically add-ons to a particular structure. BIPV, as the description implies, integrates PV much more closely and deliberately into elements of a structure. While these systems rarely match the efficiencies of traditional add-on PV projects, they bring their own advantages to the table. The first is potential cost savings through the integration of two normally disparate units. A BIPV roof for example is certainly more expensive than a regular roof, but it eliminates the redundancy of a developer having to pay for and build both a roof and PV system. There are inherent cost savings when the two are combined as one. The same applies to windows, of which Solar Solutions had two versions.

BIPV products can offer aesthetic advantages over add-on PV systems and developers and architects are often excited for the opportunity to experiment with different ways of integrating PV into the structure of a building. The more simple unit paired strings of PV cells within two layers of glass, and a more interesting offering embedded PV throughout the glass in a closely woven pattern giving the window a simple, shaded appearance. This model allowed 10 percent of natural light through while generating power. And incidentally, the attractive glass panel acts as a terrific surface for the projections of images, presentations, movies or any other display from a projector unit. Inverters from Exeltech Of course, with every grid-connected PV system comes the need for inverters. Exceltech is another company planning to float a new product on the market after securing the particularly stringent UL approval for their grid-tied inverters. This company is truly taking a revolutionary approach to inverters by offering small, simple units designed for each, yes that’s each, PV module. Dan Lepinksi, a representative of Exeltech, believes they’re the only company with this type of inverter approaching the market.

This approach is designed to tackle the efficiency losses that come from the partial shading that sometimes occurs with PV systems. As even an entry-level installer knows, partially shading of just one module drags down the efficiency of the entire series of modules. Lepinksi compared this to an eight lane highway with a one lane bottleneck at one end: “The traffic is only going to move as fast as that one lane will permit it.” By adding small inverters for each module, Exeltech says they have solved that dilemma. Additionally, the company sees this as a way to improve the efficiency of systems with modules that are split up and likely to generate different electrical loads, again drawing down the overall efficiency of the system. Exeltech’s inverters are designed to operate with nearly every module on the market rated up to 175 watts. They’ll work with small modules but there’s greater cost savings when couple with larger ones. Ultimately, Exeltech is likely to sell the units with PV module manufacturers as an integrated package. Those arrangements are still under consideration. Solar LED lighting from Carmanah Technologies

The Canada-based Carmanah Technologies is a well-known company in the PV industry, but not for traditional offerings. The company has found considerable success marketing a variety of solar-powered remote lighting systems, often combined with energy efficient LED lighting. While most are based on rather simple technology, the company has perfected a variety of products that include solar-powered illumination for bus shelters and marine buoys, to remote runway lighting products.

Their latest offering is a solar-powered pedestrian lighting pole or crosswalk warning beacon. Small solar panels charge a battery, which in turn powers flashing LED lights. Integrated wireless spread spectrum technology can activate other beacons in the system. Solar street lighting from SOL One of Carmanah’s competitors, Florida-based SOL believes that for larger lighting situations solar can still provide the cost savings and convenience, but that LEDs are not yet powerful enough yet to throw adequate light for street lighting. This company offers compact solar PV units with batteries designed for large streetlights like the type you might see illuminating a street at night. The company uses fluorescent lighting fixtures to achieve a balance between energy efficiency and bright illumination.

Hydrogen generators from Virent Energy Systems With a few of the solar offerings out of the way, this brings me to some other technologies. The first is an new hydrogen generation system from Virent Energy Systems that the company presented at PGRE in partnership with the National Hydrogen Association. The company specializes in units that generate small, localized amounts of hydrogen through their Aqueous Phase Reforming process, a carbon neutral method for generating on-demand hydrogen. The process can produce hydrogen from a wide range of oxygenated compounds, such as ethylene glycol, biomass-derived glycerol sugars and sugar-alcohols — all at relatively lower temperatures than more common industrial hydrogen generation processes.

On display was a unit no larger than a computer CPU tower case that produces enough hydrogen to power a small 50 watt PEM fuel cell unit. Next up for Virent, according to Business Development Manager Jeff Moore, is a large 5 kW unit. Rural electrification is the ideal setting for the company’s generators — particularly for countries like Brazil and India that are blessed with an abundance of biomass resources but whose electrical infrastructures are limited. Biofuels from DaimlerChrysler Moving from biomass derived hydrogen to biomass-derived biofuels, there was an exhibit from a company some of you might recognize: DaimlerChrysler. While some automakers, particularly Japanese companies like Honda and Toyota, are throwing their full focus behind hybrid electric propulsion systems, DaimlerChrysler has been increasingly interested in the use of biofuels with existing technology. The company was exhibiting their efforts through a partnership with the German company Choren. In 2001, the two teamed up to build a pilot plant for production of synthetic biodiesel from a wood-gasification process. They call the final product “SunDiesel”. Simon Godwin, manager of regulatory affairs, said this has been the company’s proactive thrust into a cleaner, more sustainable automotive future. “This is our main activity right now,” Godwin said. “We really believe this is going to grow.” The company has also embraced biodiesel from traditional production methods including investments in Jatropha-derived biodiesel. Jatropha curcas is a robust oil plant, which grows even in very poor soils and require only minimal requirements of water, fertilizer and pesticides. DaimlerChrysler is operating two experimental Jatropha plantations in India on degraded areas that can not be used for food production. And if those two processes seem a little too esoteric, DaimlerChrysler has a very tangible example of their commitment to biofuels in their CRD Jeep Liberty, a Jeep Liberty SUV which comes from the factory or showroom floor with a full tank of a 2 percent biodiesel mix to help elevate consumer awareness of biofuels. Vertical-Axis Wind Power from Dermond

Dermond, a small but hopeful player in the wind power market, was on hand at PGRE to show their “WindStor” vertical axis wind turbine. As seen in the photograph, the egg-beater shaped wind turbine is a dramatic departure from typical horizontal axis wind turbines. Richard Kaiser, who deals with investor relations for Dermond and their parent company McKenzie Bay International, said the company doesn’t expect to compete directly with large wind turbine companies, but instead to tap into the market for distributed energy for businesses or buildings looking to augment their power supplies. The WindStor is also being targeted to remote, off-grid locations. Many contracts are in the works, including one with a General Motors structure, according to Kaiser. Not everything mentioned in this article is going to be a commercial success, but they all demonstrate the ingenuity, imagination and entrepreneurial passion that has come to define the renewable energy industry. Of course, these were only a sampling of the many worthy products and companies on display at the trade show, which proved a perfect opportunity to bring these all together. Next year’s PGRE show, also to be held in Las Vegas, will be surely have more product innovations and new directions to share with the world of renewable energy.