The new tariffs, which begin August 1, 2011, culminate a controversial “expedited review” of the tariffs spurred by the rapid growth of solar PV under the program.

The scheduled two-year review doesn’t begin until this summer.

In an odd twist on the European debt crisis, Britain’s Treasury includes utility commitments to purchase electricity under feed-in tariffs as part of the heavily indebted country’s public debt.

Britain’s Treasury, consequently, was alarmed by the rapid growth of solar PV and sought to rein in new contracts.

In an apparent bid to appease furious farm groups, which had seen the solar PV tariffs as a new source of revenue, the “review” included raising on-farm biogas tariffs.

Most economists believe that feed-in tariff contracts, like those that provide electricity from conventional generation, are private commitments and, thus, private transactions. Germany, for example, does not consider feed-in tariffs a part of its public debt. Germany has the world’s most extensive renewable energy development contracted through feed-in tariffs.

The trade press has focused on the dramatic cuts to solar PV tariffs for projects greater than 50 kW because it appears that DECC and Treasury were successful in devising unattractive tariffs. The new solar PV tariffs for anything greater than 50 kW are not competitive with Germany and will likely strangle any further development of this size class. 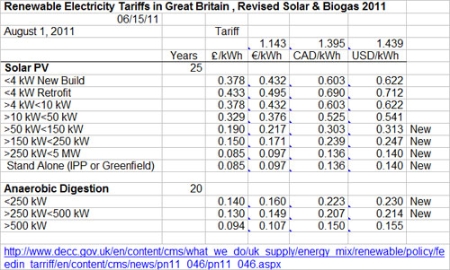 Nevertheless, it has been overlooked by many that the revised tariffs for solar PV remain superior to those in Germany up to 50 kW.

A unique aspect of the British program is the export tariff for all installations that off-load domestic consumption. This payment remains in effect and adds another £0.031/kWh (€0.035/kWh, $0.05/kWh) to the posted tariffs.

DECC added a new biogas size class of projects less than 250 kW and implemented a tariff almost £0.02/kWh (€0.023/kWh, $0.03/kWh) greater than the previous 500 kW tariff. While the new biogas tariffs are better than before, they are not competitive with Germany and are probably insufficient to drive significant development.

The new tariffs apply only to new projects, they are not retroactive. 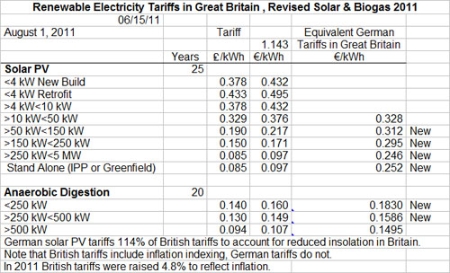 Germany has the lowest solar PV tariffs in Europe. However, German tariffs cannot be compared directly to those across the English Channel. Britain, on average, has about 14% less insolation than Germany. Thus, German tariffs must be increased by an equivalent amount if they are compared to tariffs in Britain.

Another aspect of the British program that is overlooked by the trade press is the inflation adjustment. British tariffs are fully adjusted for inflation, German tariffs are not.

Tariffs in the British program were raised 4.8% at the beginning of April to account for inflation. The new tariffs will be in effect through April 2012, when a new adjustment will take place. See Britain’s new posted tariffs with inflation adjustment.

Britain’s FIT program remains one of the world’s more sophisticated despite its limited objectives. The previous Labour government limited the feed-in tariff program to projects no greater than 5 MW and limited the total program to only 2% of the nation’s electricity supply.

Since the program was launched last year, 140 MW of small renewable systems have been installed. Solar PV accounted for three-quarters of the new capacity, and small wind turbines one-seventh.

Though the 100 MW of new solar PV installed in the past year dwarf those of previous British programs, it’s less than half what Germany installs every month.

However, Britain’s feed-in tariffs for small wind are the most aggressive in Europe and, as a result, the 20 MW installed last year far exceed that in any other country outside the US and China. 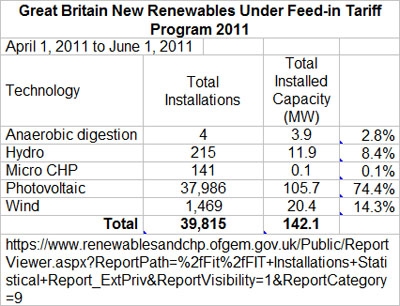