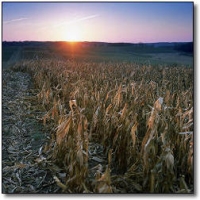 Reporting a twelve-fold enzyme cost reduction for the conversion of biomass into sugars for fuel ethanol production, Novozymes exceeded its goal of a ten-fold reduction under its US Department of Energy subcontract.

Bagsvaerd, Denmark, February 10, 2004 [SolarAccess.com] In January 2001, Novozymes was granted $US14.8 million in a three-year collaborative subcontract with the National Renewable Energy Laboratory (NREL) using funding from the US Department of Energy (DOE) to improve enzymes for the conversion of biomass into sugars for production of fuel ethanol and other valuable products. Fuel ethanol is currently produced based on an enzymatic conversion of corn starch and other agricultural products, whereas production based on biomass such as corn leaves and stalks has the potential to become the technology of the future. During the course of the subcontract, Novozymes used its proprietary biotech research platform to increase enzyme activity and fermentation yield, and to reduce production costs. These improvements have reduced the cost of enzymes required to produce one gallon of biomass-based ethanol by approximately twelve-fold from above 5 US dollars to below 50 US cents per gallon. “We see reducing the effective cost of enzymes as perhaps the greatest potential improvement in biomass-to-sugar technology, and the progress Novozymes has made in this area is a major step toward making the technology cost-competitive and a basis for bio-refinery industries,” said Douglas Kaempf, Program Manager for the Office of Biomass Program at the U.S. DOE. “This is a key stepping stone towards the utilization of biomass as a viable feedstock for the production of fuel ethanol,” said Glenn Nedwin, President of Novozymes Biotech of Davis, California, where the majority of the work has been carried out. “As a major recurring expense in biomass-based fuel ethanol production, enzyme cost reduction is critical to the economic viability of the process.” Nedwin said his company would continue to work on cost-competitive enzymes in an integrated effort with industry and with the backing of the Department of Energy and the collaborative expertise in process integration and economic modeling provided by the National Renewable Energy Laboratory. When reached later for comment on the story, William Holmberg of the New Uses Council, tempered Novoenzymes’ characterization of the news. “Novoenzymes progress is commendable, but not as important as portrayed.” Holmberg said. “It would be great for their stockholders, of importance to the advance of the industry, but only of modest importance to the future of the industry.” While Holmberg agreed that it was an important step, he reminded that it is being matched by enzymes from Genencor also receiving funds from the DOE. He added there is still a major challenge with pretreatment that will set the biomass up for conversion into fermentable sugars using enzymes. Then there is the problem of fermenting some of the non-glucose sugars. Whether or not the company’s advance is as significant as they would have you believe, it’s certainly a noteworthy step in the direction of ethanol research. Novozymes provides various enzymes for producers of fuel ethanol and commands a significant market share. In 2003, US production of fuel ethanol increased approximately 30%, due to the extensive displacement of the non-biodegradable octane booster MTBE in gasoline. Many states are moving towards phasing out MTBE because of its association with water pollution.