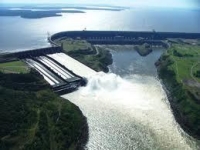 HydroWorld.com reported in April 2013 that the hydroelectric project was already on pace to a record-breaking year, having broken a 2009 record in production with a first quarter output of 8.86 TWh.

The company said consumer demand was responsible for the plant’s banner performance.

“Consumption is what drives out production,” superintendent of operations Celso Torino said. “It’s the people at home turning on their equipment who define how much we’re going to generate.”

Located on the Parana River between the borders of Brazil and Paraguay, the Itaipu complex met 16.9% of Brazil’s demand and 75% of Paraguay’s demand in 2013, the company said.