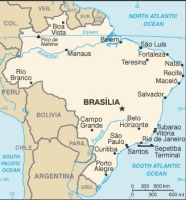 LONDON — Brazil’s total installed wind capacity could rocket from the current 2769 MW to 19,420 MW by 2020 according to new research.

And business intelligence provider GBI Research predicts the county’s solar PV market will display the most explosive growth in Brazil’s renewables industry, albeit from a much smaller foundation.

Growing at a massive rate of 59 per cent, the solar PV sector is forecast to climb exponentially from an installed capacity of 31 MW this year to 1276 MW in a period of just eight years.

GBI says that Brazil’s total cumulative installed capacity in 2011 was 120 553 MW, with 70 per cent of this accounted for by hydropower.

Other renewable power sources such as biomass, wind, solar photovoltaic and small hydro made up a further 10 per cent.

GBI predicts that excluding the substantial large hydropower sector, Brazil’s renewable installed capacity is expected to leap from 13 260 MW in 2012 to 38 015 MW by the end of the decade, climbing at a compound annual growth rate of 14 per cent.