More
Home Baseload Hydropower Blowback Seen for Wind and Other Renewables In Event of a Le... 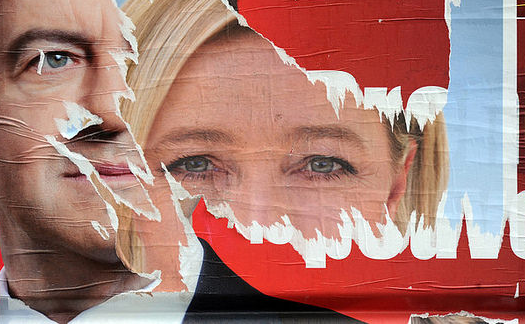 Much has been said about the differences of the two candidates in the upcoming French Presidential runoff elections this Sunday, May 7. The candidate of extreme right National Front Party, Marine Le Pen, and centrist Emmanuel Macron of the En Marche! Party have starkly different worldviews.

The two are at odds over what should be done about the economy, immigration, and France’s role in Europe. They also have crucial differences when it comes to the future of renewable energy, although little has been said in the campaign about their positions on energy and climate.

“What she really wants is to stop the deployment of wind energy in its tracks,” says Pierre Tardieu, chief policy officer of WindEurope. “Her party is on record as saying that wind turbines represent globalization.”

The National Front views wind energy as something that the EU and foreign companies are imposing on France. “Wind power therefore doesn’t mesh with their world view,” Tardieu says. “In essence, they want France to continue generating most of its electricity from nuclear power. They have no plan for an energy transition.”

Whereas the operating costs of most French nuclear plants built decades ago are low because their capital costs have already been amortized, their day-to-day power costs don’t cover long-term life-cycle costs.

Those costs include set-asides for potentially catastrophic major accidents, dismantling worn out plants, insuring their contaminated sites, and storing their radioactive wastes for millennia.

Le Pen’s positions on renewable energy are not particularly popular, according to Tardieu. “If you look at the opinion pools,” he said, “the French like renewables. They like wind energy. They like solar. France hosted COP21 [the 2015 global climate talks]. There’s a lot of support for the energy transition.”

Despite the lack of support for the National Front’s criticism of renewables, Tardieu believes the party espouses it anyway because it reinforces the party’s anti-globalization posture.

Hypothetically, if Le Pen won—which polls suggest is unlikely—and if she imposed a moratorium on wind and took France out of the EU, it would clearly be damaging for the wind industry in Europe and in France, says Tardieu.

Although France has not been a leading wind market, it did install 1.5 GW of wind last year and that’s significant for the industry, Tardieu noted.

In contrast to Le Pen’s stance on renewables, Macron—a banker and former economy minister—favors auctions for wind energy capacity in which renewable energy investors would get clear signals of long-term national wind energy expansion on which to base investments. “What we really like,” says Tardieu of WindEurope, “is the transparency—knowing exactly what the government is planning in terms of deployments.” Those indications are already being given to an extent for solar energy in France.

Macron’s stance on the EU also endears him to the renewable industry. He is very pro-EU and the European Commission has been supportive of long-term measures to expand the use of renewables in Europe to 2030.