Gasification technologies offer an opportunity to use biomass more efficiently, especially when used in CHP. The commissioning of a novel gasification demonstration project located in Skive, Denmark, gives Kari Salo and Andras Horvath the opportunity to explore the operational challenges and the lessons to be carried forward.

At the Skive gasification demonstration project in Denmark, a bubbling fluidized bed (BFB) gasifier is used to produce gas from wood-based biomass. This gas is then used in of reciprocating engines in a combined heat and power (CHP) application.

Based on a low pressure BFB system and three gas engines, a single gasification plant supplies fuel to all the engines. The commissioning of the plant started in late 2007 and, using one gas engine, operations initially began in the early summer of 2008. The second and third gas engines were installed during summer 2008. They are due to begin operations as REW goes to press.

The project is financed on commercial basis, but as it is a first-of-a-kind demonstration facility, subsidies are provided by the EU, the US Department of Energy and the Danish Energy Agency (DEA).

The biomass gasification-gas engine concept was selected by Skive in 2004 because in small-scale decentralized CHP power generation, the electrical efficiency must be maximized to make the plant economically feasible. The gasification technology enables the plant to produce about 30% more electricity than a conventional steam process from the same amount of biomass.

The local district heating company, I/S Skive Fjernvarme, is the owner and also acted as the main contractor in the project, having responsibility for integrating the various component parts, which is expected to produce net 5.4 MWe and 11.5 MWth once fully commissioned. Besides providing 70% of the district heating production for Skive Fjernvarme, the facility will also produce 40 GWh of electricity annually. It is not operated during the summer months when district heating demand is low and the small amount required is produced with an existing biomass boiler plant. 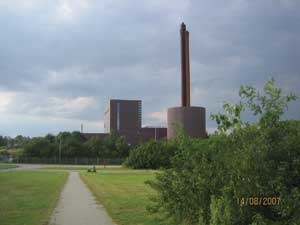 The gasification plant is designed to utilize wood pellets and/or chips. The moisture content of wood pellets is typically below 10%, while the moisture content of wood chips can be up to 30%. Fuel, initially pellets, is supplied from the existing indoor wood pellet storage site next to the gasification plant. The fuel is fed through two lock hopper systems by feeding screws into the lower section of the gasifier’s fluidized bed. The gasifier is operated at a maximum of 2 bar over pressure and 850ºC temperature. Air is used as the gasification medium and dolomite is used as the fluidized bed material. The product gas generated contains about 22% carbon monoxide (CO), 20% hydrogen (H2) and 5% methane (CH4) by volume as the main combustible components. It has a heating value of about 5 MJ/kg.

In normal operations, the first step in the gas cleanup process is a novel catalytic cracker that reforms tar compounds generated during the gasification process to hydrogen and carbon monoxide. Next, the gas is cooled and passed through bag filters to remove dust. The filtered product is then scrubbed with water where it cools to 30 ºC while the water content decreases. The heat from the gas removed in the scrubber is also used to generate district heat. The reheated gas of 80% relative humidity is then used in the internal combustion engines, each with a 2 MWe capacity.

Both the heat from gas engine cooling (lubrication oil and jacket cooling) and the exhaust gas is recovered for the production of district heat in separate heat exchangers. Product gas may also be utilized in two gas boilers of 10 MJ/s capacity to heat water for district heating or flared off in a possible emergency situation.

The plant is designed to operate at between 30% and 140% load, corresponding to 28 MW of fuel heat input. Operation with all three gas engines running at 13 bar is considered as 100% nominal load. Initially, the engines are expected to operate at 10 bar, corresponding to 80% load. The 130% load also corresponds to the full load operation of the boilers, which provide operational flexibility when the engines are not available due to regular maintenance.

The capacity of the CHP plant is controlled by the heat demand of the district heating network. The overall plant performance using wood pellets gives a maximum efficiency of 87%. More detailed performance figures are set out in Table 1, above right.

Commissioning, start up, and operations

Plant commissioning and cold testing started in the autumn of 2007 and the gasifier hot start-up and the first gasification were executed later that year. The start-up occurred stepwise with the gasifier–gas

cooler–filter–and gas boiler process operated first, as an independent system, to verify the operation of the gas production system. Once this was supplying gas to the boilers and delivering district heating to the hot water network of the town, a new gas cleanup line was commissioned.

The performance of the gasification system was tested during spring 2008 and the plant logged 1040 hours to June.

Initially, plant sub-systems were optimized separately. Their integrated operation and the related optimization was conducted when the gasification plant, including the full gas cleanup train, first supplied gas to the boilers. During gas boiler tests the product gas quality (all impurities and contaminants as specified by the gas engine vendor) was measured in detail. Based on the measured results it was decided to launch the gas engine operation with a single unit. The engine achieved full load, grid-connected operation after a few days.

After start-up of the first engine, in May 2008, the most important operational considerations could be tested before the summer. The completion of the optimization and start-up of the other two engines is currently underway.

The results achieved so far show that the gasifier system design is highly suitable for this type of application. The gasifier is working as predicted and the raw gas quality including the gas heating value corresponds well with the original design requirements.

The gas cleaning system has also been thoroughly tested, showing that the required gas quality has been achieved.

It was, again, learned that the path from a pilot plant to a demonstration plant is a difficult one – long, arduous, and full of challenges. The technical challenges include: scale-up from pilot to commercial, a lack of long-term data, integrated plant control, missing detail from design information, and a long and costly commissioning period requiring extensive measurement and testing.

The economic challenges are those related to the high investment and operating costs due to its first-of-a-kind nature. The lending banks commit a thorough due diligence, and liquidated damages requirements are normally strict, therefore government grants and subsidies are currently required. The type of plant supply contract is not that clear in a demonstration project – it can be a turnkey contract or the owner can act as the general contractor or some model in between, depending on decisions on risk sharing.

The institutional challenges are fuel availability and supply, renewable energy prices and government carbon emission reduction targets, and availability of subsidies such as investment and tax credit supports. Also, the goals of stakeholders may be conflicting. The owner of the project wants to produce cheap electricity and heat and the equipment vendor to demonstrate new technology. The most critical aspect, however, for a successful demonstration project is to have the right project owner and the right location.

The Skive project has managed to overcome these challenges and at the moment is operating and demonstrating the feasibility of this new technology.

Kari Salo is the managing director of Carbona Inc, Andras Horvath is the Director of Technology in Carbona.
e-mail: carbona@carbona.fi