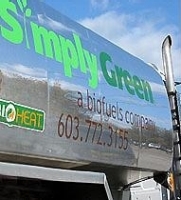 “I actually had a significant uncontrolled fire in my system due to petroleum sludge build up,” she says, explaining that the oily deposits in her furnace had caught on fire.

Until that point, she’d never given much thought to what she used to heat her home. Then her furnace technician suggested she try something called Bioheat from a local supplier, Simply Green. The small company provides renewable fuels for both homes and transportation.

Owner Andrew Kellar admits it was difficult to attract customers at first because of the misconception that people would have to modify their heating systems or vehicles to use Bioheat and biofuel.

“Anybody that uses traditional oil to heat their homes can use the Bioheat product that we have,” he says. “It’s nothing more than a blend of traditional home heating oil with this biofuel that gets blended in. Shows up in a traditional looking oil truck.

“There’s no modifications to their home heating system that they have to do. It actually helps the systems to run more efficiently.”

In fact, he points out, Bioheat in its purest form has a solvent characteristic that helps improve the efficiency of a heating system — something regular home heating oil doesn’t have.

A month after her first fill-up with Bioheat, Shannon Hill checked her furnace fuel tank. The needle had barely budged. Thinking there must be some mistake, she tapped her gauge to see if it was broken. But the reading was accurate. Her furnace had burned less than half the usual amount of fuel.

“I saw a significant decrease in fuel consumption. I didn’t do anything different — no insulation, no new roof, no nothing other than switch,” she marvels. “Not only do I feel better about it financially, but obviously environmentally, it was my main reason in calling.”

Simply Green has a firm commitment to use non-food sources for its fuel. These days, the company’s so-called feedstock comes from animal fats that would simply go to waste, as well as used restaurant grease and a variety of soy products. But Kellar says they’re also looking at a new source: algae.

“We’re part of a group up here in New Hampshire researching algae as the feedstock. Algae has become a really great answer to the whole ‘food-for-fuel’ thing,” he explains. “It is grown on land where you couldn’t grow food. You could grow it on top of a landfill or land that’s not set up for producing food.”

A hectare of algae could produce hundreds of times more oil that a hectare of corn, and a number of companies around the country are working on technology to make algae a commercially viable fuel feedstock.

Hill was so impressed with her Bioheat experience that she went to work for Simply Green doing public relations and marketing.

A few months after she started, three home heating oil suppliers in the neighboring state of Maine went out of business due to rising oil prices. Because they could not honor their contracts, more than 300 customers who had paid in advance for deliveries were literally left out in the cold.

Hill recalls reading about the plight of these people, including a woman and her two children who were completely out of oil and had nowhere to go.

“She had spent upwards of $1,200, and she was out and couldn’t afford to refill her tank,” Hill says.

Hill brought the article to Kellar and asked if the company could do anything to help.

Kellar decided to sell Simply Green’s fuels to the other companies’ customers at cost. Though it was out of their customer service area, he found a way to get all the fuel up to Maine. As word of what he wanted to do spread, Simply Green’s phone began ringing off the hook with calls from people who wanted to help deliver it, as well as sign up for Bioheat.

“We were just doing it because we felt as a business we should be helping people in our community,” he reports. “The amount of exposure and excitement that we got was beyond our wildest dreams.”

The company’s customer base jumped to 800 clients, up from just 100 one year earlier.

Kellar and Simply Green’s good deed did not go unnoticed by the government, either. The state of Maine recently honored the company with its Environmental Hero Award.

Owner Recognizes Need to Protect Environment for Next Generation

Kellar says he’s always been interested in the environment, but until he and his wife adopted three children earlier this year, he never really realized just how much of an impact he could have.

“It didn’t hit home before, but when children come to you — by birth or adoption — it really opens your eyes up to what’s going to be left behind 10, 15, 20 years from now,” he says.

In November, Simply Green will open its first local biofuel station and convenience store. Kellar’s goal is to open three or four more stations around New England over the next two years in a continuing effort to make biofuels a more mainstream energy source.

“Simply Green is an example of what’s to come in the alternative energy field,” he says. “We’re in a very traditional industry, but what we’re trying to do is to put a new twist and look to a very old-school way of thinking, from the type of products we’re offering to the way we deliver those products to the way we operate our business to the way we give back to the community. We just want to put a new look on the face of oil.”

He adds, happily, it looks like he’s well on the way to reaching all those goals.

You can listen to this report by clicking here.

Erika Celeste is a reporter for Voice of America.