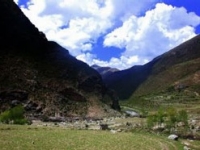 They were told it would never work in the high altitude and cold climate of Tibet. But a Beijing-based non-profit and Worldwatch Institute partner, the Global Environmental Institute (GEI), has successfully implemented a biogas program in the mountainous Chinese province.

The project provides clean, renewable energy to households and complements the region’s growing organic agriculture trade. Located in Wujinmai Village, it is the most recent outgrowth of GEI’s sustainable rural development program and mirrors a three-year-old program in Yunnan province that boosted farmer incomes 20-fold. GEI’s program, launched in April 2006, uses a three-pronged approach to address issues of pollution and poverty, according to assistant executive director Lila Buckley. The first component is composting animal manure, a potential groundwater pollutant, into both biogas for energy and fertilizer for growing organic crops. GEI trains farmers to manage and maintain the “upfloating” biogas systems, small tanks that employ simple technology and require only one cow or three pigs to provide 1-2 five-person households with year-round heating and cooking fuel. The clean, renewable, and free source of energy eliminates the need for Tibetans to spend hours each day collecting firewood. Sunny but cold Tibet provides ideal conditions for the second element of the program: greenhouses for organic agriculture production that double as homes for the biogas tanks, which would otherwise freeze. The third component involves capacity building and skills training to help the farmers learn to better manage their new businesses selling surplus organic vegetables. Though the project is less than a year old, Buckley notes it is “working amazingly well.” In November, according to a GEI news release, Tibet’s Development and Reform Commission inspected the villagers’ understanding and use of the biogas system and announced plans to replicate the project in nearby Shangsan Village in the coming year. This story was produced by Eye on Earth, a joint project of the Worldwatch Institute and the blue moon fund. This article reprinted with permission of the Worldwatch Institute.