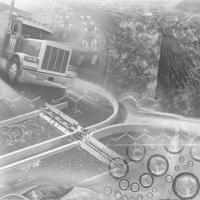 California, United States – Transportation experts are proposing that the research and development of next-generation biofuels must be done in conjunction with the development of advanced combustion engines if those biofuels are to become a reality and long-term success in the U.S. transportation sector, according to a new report issued by Sandia National Laboratories.

The recommendations were made following a Sandia-hosted workshop held in November, Next Generation Biofuels and Advanced Engines for Tomorrow’s Transportation Needs. Participants included researchers at the Department of Energy’s Combustion Research Facility (CRF) and Joint BioEnergy Institute (JBEI), as well as representatives from oil companies, biofuel developers, engine manufacturers, suppliers and experts from the university, regulatory, finance and national laboratory communities.

The workshop, said Ron Stoltz, manager of Sandia’s Advanced Energy Initiatives, was designed to identify opportunities for co-development of biofuels and engines, an often-overlooked issue.

“The oil companies and the automobile and truck engine companies have engaged in a dialogue and collaboration on fuel and engine issues for almost 100 years,” Stoltz said. “But the same cannot be said for the majority of biofuel start-up companies, especially those that are thinking ‘beyond ethanol’. The report highlights how fragmented the biofuels industry is today and how, by putting serious thought behind some key issues like fuel chemistry linked to engine performance, great strides can be made.”

The primary goal of the workshop, Stoltz said, was to foster dialog among researchers and experts from industry, academia and government, with the ultimate hope of finding ways to accelerate the transition to biofuels.

Workshop participants agreed that a series of key attributes are necessary to make the introduction of next-generation biofuels a reality in the transportation sector. Biofuels, they concluded, must be:

Among other observations, participants also concluded that a consolidated, federally-funded research program on biofuels and advanced engine concepts is necessary to accelerate the transition to biofuels.

Bob Carling, director of Sandia’s Transportation Energy Center, said Sandia’s role as a national laboratory is to look to the future and inform policy makers and others as to the potential of advanced technologies and those technical challenges that stand in the way of commercialization.

“In the biofuel arena, or more generally advanced liquid fuels, the need is to understand how chemistry impacts the performance of any advanced fuel either through efficiency gains or losses while meeting current emission regulations,” Carling said. “Sandia will continue to work with the scientific and engineering community as new, advanced liquid fuels are being developed to integrate its research into our work in the development of knowledge and understanding of chemistry and its role in new internal combustion engine architectures.”

Mike Janes is a communications officer at Sandia National Laboratories in California.