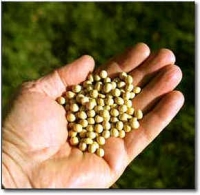 St. Louis, Missouri [RenewableEnergyAccess.com] Rising fuel prices, growing national security concerns and a new tax incentive for biodiesel are all contributing to renewed interest in biodiesel – the cleaner burning alternative to petroleum-based diesel made from renewable resources like soybeans and other natural fats and oils.

“I believe biodiesel has an outstanding future in St. Louis and in the rest of the state and nation,” said Kevin Herdler, Coordinator for St. Louis Clean Cities, a Department of Energy program dedicated to reducing petroleum consumption through cleaner burning fuels. “Because it can be used in today’s diesel vehicles, biodiesel offers a seamless transition to a cleaner burning American fuel immediately.” A biodiesel production plant is also in the works in Missouri, which should lead to increased economic activity and better accessibility to the fuel for Missouri consumers. Missouri startup biodiesel company, Mid-America Biofuels, plans on opening a 15 million gallon per year biodiesel plant in the near future, most likely in the central part of the state. The plant will create jobs and will use the soybean oil from nearly 10 million bushels of soybeans grown in the state, representing approximately seven percent of Missouri’s average annual harvest. DaimlerChrysler hopes to capitalize on the growing interest in biodiesel, along with a trend toward renewed consumer interest in diesel passenger vehicles, with its introduction of the Jeep Liberty Common Rail Diesel (CRD) later this month. Each 2005 Jeep Liberty CRD leaving the factory will be powered by B5 — a five percent blend of biodiesel and regular diesel. More than 40,000 consumers have already expressed interest in Jeep Liberty’s “clean running diesel,” according to the National Biodiesel Board (NBB). NBB members, convening for their annual board meeting recently held in St. Louis, were among the first in Missouri to test drive the Jeep Liberty CRD when DaimlerChrysler hosted a Ride-and-Drive experience at the board meeting. The Jeep Liberty diesel, the first diesel-powered mid-size SUV to be offered in the United States, will achieve approximately 30 percent better fuel efficiency than Liberty’s comparable 3.7-liter V-6 gasoline engine, according to Jeep. Diesel engines also reduce emissions of greenhouse gases by 20 percent compared with gasoline engines. “With biodiesel, we can increase these benefits even further,” said Chrysler Group President and CEO Dieter Zetsche. “Because biodiesel is made from renewable resources we further reduce our dependence on petroleum. This is an important first step in encouraging wider use of clean, renewable fuels.” Biodiesel reduces emissions of particulate matter, unburned hydrocarbons and carbon monoxide compared to petroleum diesel. Biodiesel also significantly reduces emissions of lifecycle carbon dioxide. Already, entire fleets of vehicles are using biodiesel because it makes good business sense. In one example, the Maryland-based Purdue chicken company — which owns and operates their own soybean division — now uses biodiesel in all their trucks throughout the U.S. If every diesel vehicle on the road today used five percent biodiesel, the United States would displace the equivalent of 1.7 billion gallons of foreign oil, according to the NBB. Bolstered by growing acceptance of biodiesel within the auto industry and the opportunities offered by the new biodiesel tax credit signed into law in October, NBB expects to see a significant increase in demand as the new tax credits take effect this month. The tax incentive is expected to help close the gap in cost between regular petroleum diesel and biodiesel fuel. According to a study by the U.S. Department of Agriculture (USDA), the tax incentive could increase demand for biodiesel from 30 million gallons per year to more than 124 million gallons per year over the next few years. Depending on a number of other factors, including crude oil prices, demand could grow much higher than that. “Every gallon of biodiesel we use will be one less gallon of petroleum we need to import from the Middle East,” said Joe Jobe, Executive Director of NBB. “Energy security and national security go hand-in-hand.”