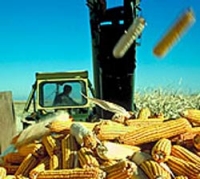 Minneapolis Minnesota [RenewableEnergyAccess.com] Five University of Minnesota researchers have taken a stand in the long-running debate over whether ethanol from corn requires more fossil fuel energy to produce than it delivers. Their answer? It delivers 25 percent more energy than is used (mostly fossil fuel) in producing it, though much of that 25 percent energy dividend comes from the production of an ethanol byproduct, animal feed.

But the net energy gain is much higher — 93 percent — from biodiesel fuel derived from soybeans. And alternative crops such as switchgrass or mixed prairie grasses, which can grow on marginal land with minimal input of fossil fuel derived fertilizers and pesticides, offer the best hope for the future, according to the researchers. Led by Jason Hill, a postdoctoral associate in the Department of Ecology, Evolution, and Behavior and the Department of Applied Economics, the team published this first comprehensive analysis of the environmental, economic and energetic costs and benefits of ethanol and biodiesel in the pages of the Proceedings of the National Academy of Sciences. “Corn ethanol and soybean biodiesel have proven that we can make viable biofuels,” says David Tilman, a coauthor of the study and Regents Professor of Ecology. “This is an important first step toward developing a renewable and environmentally friendly biofuel energy supply, but the challenges ahead are still immense.” A major challenge is getting enough feedstock for the biofuels. Already, 14.3 percent of corn grown in the United States is converted to ethanol, replacing just 1.72 percent of gasoline usage. Even if all the remaining corn were converted to ethanol, the total ethanol would only offset 12 percent of gasoline. The entire soybean crop would replace a much smaller proportion of transportation fuels — only 6 percent of current diesel usage, which itself amounts to a tiny fraction of gasoline usage. With world energy and food demands increasing, the study’s researchers say their analysis fills a need for guidance in choosing the best alternative energy strategies. That’s why the University’s Initiative for Renewable Energy and the Environment (IREE), which aims to make Minnesota a national leader in the development and production of renewable fuels to reduce greenhouse gas emissions and other forms of pollution, helped fund the work. “Quantifying costs and benefits of biofuels throughout their life cycle allows us to make rational choices and identify better alternatives,” Hill says in a news release. “The reason for doing this study was to learn from our first two successful biofuels how we could do it better,” says Tilman. “It’s a bit like the Wright Brothers — a good first start, but if I’m flying across the Atlantic, I want a jet.” The researchers examined every stage of the biofuels’ production and use. They considered such costs as the effort to raise crops, environmental effects of fertilizers and pesticides, transportation and the energy required to distill ethanol. The analysis showed that growing both corn and soybeans caused soil and water pollution from such chemicals as the nitrogen and phosphorus in fertilizer and from pesticides, with the pesticides used in corn production being especially harmful. But biodiesel used, per unit of energy gained, only 1 percent of the nitrogen, 8.3 percent of the phosphorus and 13 percent of the pesticide (by weight) of corn production. The researchers also compared greenhouse gas emissions from the two biofuels with emissions caused by producing and burning enough gasoline or diesel to yield the same amount of energy. Emissions from the production and use of corn grain ethanol were 12 percent lower than the net emissions from gasoline; the reduction was 41 percent for biodiesel from soybeans. These figures show that biofuels have the potential to provide significant environmental benefits. However, the benefits will only be substantial when much more biofuel is produced and when it has much greater greenhouse gas reductions. For example, if one replaced a total of 5 percent of gasoline energy with ethanol energy, greenhouse gas emissions from driving cars would be a bit more than a half percent lower (5 percent times 12 percent). It must be borne in mind, too, that these figures are only for transportation-related energy usage. Considering total energy use, which includes building heating and electricity, the fraction of savings from transportation biofuels drops by two-thirds. Also, these reductions hold only for crops grown on land already in production. “Converting intact ecosystems to production would result in reduced greenhouse gas savings or even net greenhouse gas release from biofuel production,” the researchers write. The researchers noted that rising gasoline and diesel prices have made the development of biofuels more economically advantageous, and that biodiesel’s environmental benefits seem strong enough to merit subsidy. Yet ethanol also plays an important role as an additive by oxygenating gasoline and making it burn more cleanly. “New and better transportation biofuels and greatly increased energy efficiency are essential for our economy and our environment,” says Tilman. “We also need renewable electricity, including both wind energy and renewable biofuels that take the place of coal. Coal is a major source of electricity and of greenhouse gases.” Besides Hill and Tilman, who is the world’s most cited ecologist, study authors were Stephen Polasky and Douglas Tiffany, professors of applied economics; and Erik Nelson, a graduate student in applied economics. The researchers point to nonfood plants that can grow on marginal lands with minimal input of fertilizers and pesticides as the best hope for bio-based energy. Crops like switchgrass, diverse prairie grasses, and woody plants may offer the best prospects for supplying biofuels. Article courtesy of Deane Morrison, University of Minnesota