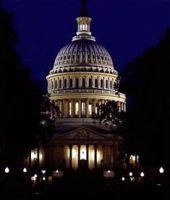 Washington, DC [RenewableEnergyAccess.com] Tax credits to promote renewable energy got a reassuring boost from lawmakers this week in Congress as a Senate bill was introduced to extend new federal tax credits authorized in the Energy Policy Act of 2005 through 2010.

S. 2401, the Alternative Energy Extender Act, was introduced by Senators Charles E. Grassley (R-Iowa) and Max Baucus (D-Mont.), the chair and ranking member, respectively, of the Senate Finance Committee. Among the federal tax credits it extends are the 30 percent tax credit for solar energy systems and the production tax credit (PTC) for wind power. Both are hailed by industry as critical to their continued success, but each is currently a short-lived policy, both coming to a close by 2008 unless Congress acts to reinstate them. The renewable energy industries, especially the equipment- and capital-intensive wind power industry, argue the two-year window is helpful but not adequate for businesses to make substantive investments in infrastructure to meet demand. This short window is cited as partly responsibly for current tight demand for wind turbines and solar panels alike. Rhone Resch, Executive Director of the Solar Energy Industries Association (SEIA) says the extension offered is in the bill is shorter than the eight year extender (total) they are advocating for but that it is a good sign that the Senate is willing to push extenders this year in a bipartisan fashion. “We expect this bill to have strong bipartisan support and since it was introduced by the Chairman and Ranking Minority Member, it will have the legs to move through Committee quickly,” Resch said. The bill also extends energy efficiency tax credits for new homes and commercial buildings, a move hailed by the Alliance to Save Energy. “The landmark energy-efficiency tax incentives included in the Energy Policy Act already are helping American consumers and businesses reeling from high energy prices, but in order for these incentives to transform the market, they must be in place for an adequate period of time,” said Alliance President Kateri Callahan. “Commercial buildings and homes built today could last up to 100 years, so extending the tax credits long enough to give energy-efficiency a real foothold in the market will benefit our economy, environment, and energy security for generations to come.”