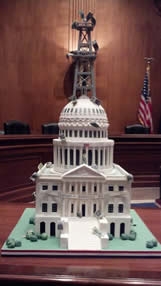 Happy birthday, Big Oil! A group gathered in Washington D.C. this week to celebrate 100 years of tax subsidies for the oil industry – but attendees certainly weren’t oil-industry insiders – quite the opposite, in fact. The party consisted of more than 50 members of the American Coalition of Ethanol (ACE) and the Iowa Renewable Fuels Association (IRFA), who were in town to meet with members of Congress during the ACE fly-in meeting.

And what better way to celebrate a birthday than with a custom cake crafted by the infamous Charm City Cakes – it modeled the U.S. Capitol building with an oil rig affixed to its roof, spewing hundred-dollar bills. Though the cake seemed to represent a critical picture, Rick Schwarck, president of IRFA, said that isn’t necessarily so; it’s more of a witty reminder to Congress.

“Big Oil has benefited from taxpayer support for 100 years – and not just with tax subsidies, but mandates and loan guarantees and other policies,” said Schwarck in a statement. “So when the debate heats up over the Renewable Fuel Standard (RFS) and other renewable fuels policy, the debate should be a full, fair and factual discussion that takes an honest, hard look at how federal policy has been tilted in favor of Big Oil for a century.”

According to IRFA, the list of current oil specific tax subsidies includes the following:

The birthday party was held after recent heavy criticism of the Renewable Fuel Standard that was established in 2007, and requires refiners to purchase 16.55 billion gallons of renewable fuels this year. According to Bloomberg, the American Petroleum Institute (API) claims that the mandate will cause huge disruptions in fuel supply due to a steadily decreasing consumer demand. API also has concerns over ethanol blends higher than 10 percent, stating that they have not been cleared by the government and may damage vehicles.

There is strong opposition to the RFS in Congress, with many calls for reform. Several groups have stood against the mandate for several reasons including the possibilities of food scarcity and rising food prices, which recent studies claim to have disproven. According to the Hill, Sen. Lisa Murkowski (R-Alaska) most recently voiced a call for RFS reform: “Let’s have the ability to pull back and say, ‘Maybe this one just didn’t work the way that we had hoped it would.’ Let’s not be afraid to admit that we might need to reform it.”

Despite these claims, biofuel supporters suspect that most pushback stems from refiners losing money as biofuels increasingly creep into the energy landscape. Said Brian Jennings, ACE executive vice president, in a release, “If oil companies cannot stand on their own two feet after 100 years of clinging to certain taxpayer subsidies, Congress shouldn’t hurt American consumers by repealing the RFS, a policy that helps level the playing field with oil a little bit by giving people affordable and renewable fuel choices.”