The debate about climate change has in recent months shifted from whether it is happening (it is) and whether humans are causing it (they are; pay no attention to that nonsense about those emails) to whether the developed nations can afford to do anything significant about it. A new study of Europe finds they certainly can.

Europe’s Share of the Climate Challenge; Domestic Actions and International Obligations to Protect the Planet, from the Stockholm Environment Institute (SEI), found the 27 EU countries can cut greenhouse gas emissions (GhGs) 40% below 1990 levels by 2020 and 90% by 2050 at a cost of 1.1%-to-3.3% of the projected 2020 EU GDP of €13.6 trillion. In comparison, the authoritative Stern Review on the Economics of Climate Change found that doing nothing and waiting to deal with the impacts of climate change would likely cost 5%-to-20% of GDP. ::continue:: 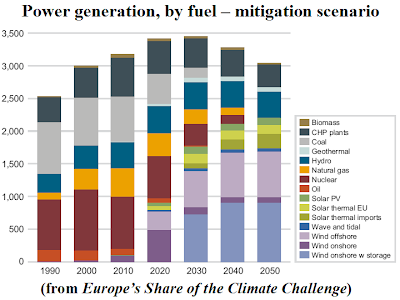 Europe’s efforts against global climate change, like the world’s, must focus on 2 areas: (1) Domestic actions to cut GhGs in the developed world through (a) “a dramatic shift” to New Energy (wind, solar, hydrokinetics, geothermal and biomass-based Combined Heat and Power) and (b) “radical improvements” in Energy Efficiency; and (2) International actions in the poor and most vulnerable places to (a) assist in the building of New Energy and Energy Efficiency, (b)interrupt ecosystem degradation and (c) mitigate the harms already done by early impacts.

This post is based on New study shows 40% emissions cuts possible in Europe; Fair solutions are financially and technically achievable, but political will is still required, December 1, 2009, Friends of the Earth Europe.