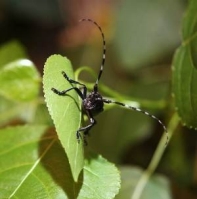 Pennsylvania, United States [RenewableEnergyWorld.com] A little-known fungus tucked away in the gut of Asian longhorned beetles helps the insect munch through the hardest of woods according to a team of entomologists and biochemists. Researchers say the discovery could lead to more efficient ways of breaking down plant biomass for generating biofuels.

Microbes in the gut of insects are known to break down cellulose, but little is known about how, or whether, insects degrade lignin. This natural polymer helps plants stay upright and protects them from most forms of microbial attack.

“Lignin is nature’s plastic and any organism that wants to get to the sugars in a plant has to be able to get past this protective barrier,” said Ming Tien, study co-author and Penn State professor of biochemistry and molecular biology. “We suspect that the fungus produces enzymes that help the beetles degrade lignin.”

Before this report, it was thought that insects are unable to extensively break down lignin, and that they get around the problem either by feasting on wood that has already degraded, or by living close to fungi that can degrade the wood for them.

But this theory fails to explain the ability of insects to feed and grow within healthy living trees.

“How these insects are able to circumvent this plastic wall [lignin] and get at the goodies, the sugars, behind it has remained a mystery,” said Tien, who was recruited by Kelli Hoover, co-author and Penn State associate professor of entomology, and Scott Geib, lead author and Penn State doctoral student in entomology, to tease out an explanation.

The Asian longhorned beetle is one such insect that attacks healthy trees and bores through the hard wood to get at the succulent energy-rich matter inside. In the process, this invasive pest from China grows nearly 300-fold from being about the size of a grain of rice to a few inches in length.

Hoover and her colleagues speculated that the beetle could be harboring a community of microbes in the gut, which helps in breaking down lignin.

The researchers compared the chemical structure of non-degraded wood before and after it had passed through the gut of two wood-eating insects. To measure the degree of change in the lignin, they first fed pin oak wood to Asian longhorned beetles. Next they fed ponderosa pine wood to the Pacific dampwood termite, an insect that typically eats only dead wood.

Chemical analyses of feces from the two bugs indicated that they are able to alter the chemical structure of lignin by selectively adding or removing certain groups of molecules from the polymer.

Such alterations, said Geib, make it easier for the insect to break down wood.

“This fungus has genes that then make enzymes,” explained Hoover, whose team’s findings appeared in the Proceedings of the National Academy of Sciences. “We have been able to detect messages from the [fungal] DNA, which get translated into enzymes.”

However, Geib cautions that while the gut-borne fungus is certainly a key player in degrading wood, it may just be part of a bigger picture.

“It is likely that there is an interaction among enzymes produced by the fungus, hundreds of bacteria within the insect gut, and the insect itself,” explained Geib. “It is a consortium that is doing the job.”

Both Geib and Hoover, who study Asian longhorned beetles, believe they may have stumbled upon a novel evolutionary adaptation in the insect world.

“This type of fungus (in the Asian longhorned beetle) is known to cause disease in plants,” said Hoover, whose work is funded by the Alphawood Foundation and the Penn State College of Agricultural Sciences. “But this particular strain appears to be unique. It looks like these insects somehow acquired the fungus to live in their gut and help them break down wood.”

She also points out that these fungi are more efficient than their free-ranging counterparts. While those fungi take months, even years, to break down wood, the gut-borne fungi seem to do it much faster.

Researchers say the speedy process could potentially be harnessed to produce biofuel.

“Getting rid of the lignin barrier and making the cellulose more accessible is the most expensive and environmentally unfriendly part of making ethanol from biomass,” said Geib. The team’s discovery, he added, could lead to the potential development of cheaper and more efficient enzymes for converting wood into ethanol.

Amitabh Avasthi is a science writer with the Office of Science/Research Communications at Penn State University.