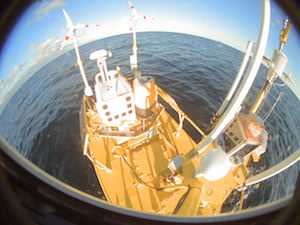 Bay State Wind last week said that it has received federal approval for a site assessment plan (SAP) for its wind farm in Massachusetts near Martha’s Vineyard, and has moved forward with measurement of lease site conditions.

The owners of the Bay State Wind joint venture — DONG Energy and Eversource — said the SAP approval is the first of its kind from the U.S. Department of the Interior’s Bureau of Ocean Energy Management (BOEM).

“We are thrilled to be the first in the country to receive this approval from BOEM, and to be a part of this huge step forward for the offshore wind industry in the U.S.,” Thomas Brostrøm, North America president of DONG Energy, said in a statement. “Bay State Wind will produce reliable clean energy for Massachusetts with scale that maximizes job creation, cost effectiveness and economic benefits for Massachusetts and local communities. We look forward to continued collaboration with BOEM as we work to make Massachusetts and the U.S. a hub for offshore wind.”

The companies said that Bay State Wind has deployed the FLiDAR WindSentinel system off the coast of Martha’s Vineyard to measure wave and wind speeds in the project’s lease area. The system is currently deployed for two years, and includes a camera to broadcast images from the system as it collects data — viewable online 24 hours per day at: https://portal.axys-aps.com/platforms/P2012P/.

Massachusetts utilities in June issued a request for proposals for offshore wind projects to fulfill a state mandate to acquire 1,600 MW of offshore power. The companies said that Bay State Wind will submit a proposal for the Massachusetts contracts, which it will be awarded in 2018.