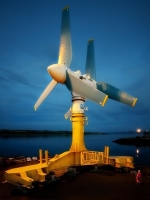 Scotland — Inventors have been experimenting with wave and tidal technologies for over 100 years, with little success. But now that some of the world’s largest companies are backing the industry, onlookers hope that the time has come for marine energy to finally take off.

It’s often said that marine energy is about 10 years behind wind energy. While the lifetime and cost of new wave and tidal technologies are still not competitive with better-established renewables, the industry is making some progress.

Last week, the Atlantis Resources Corporation showed off its 1-MW tidal turbine in Scotland, a device that could bring marine renewables a bit closer to the size and scope of wind technologies.

That might be a bit of a stretch considering how nascent marine renewables are. But Atlantis says this tidal turbine is the largest ever built – certainly a notable step. It took about 10 years and $7.5 million to develop this device. The question is: How well will it work?

Atlantis and a team of researchers will find out after the device is installed off the coast of Orkney, Scotland later in the summer. Orkney plays host to the European Marine Energy Center, a testing hub for marine energy technologies.

The company calls the development of marine renewables the “start of a new industrial boom.” We’ve heard people singing the praises of these technologies for decades, with very few major developments. If Atlantis succeeds in proving the effectiveness of this 1-MW turbine, the tides may very well change for the industry.

For more information on the industry, you can listen to a podcast on the progress of marine energy technologies here.