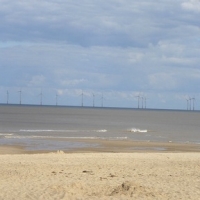 Washington, DC, USA — Non-profit international organization, Oceana, whose sole focus is ocean conservation, released a report this week that shows that offshore wind power up and down the Atlantic coast could generate 30% more electricity than “economically recoverable offshore oil and gas in the same region combined.”

The report, “Untapped Wealth:  The Potential of Offshore Energy to Deliver Clean, Affordable Energy and Jobs,” analyzes the wind power potential of offshore wind on the Atlantic coast from Massachusetts to South Carolina.  It states that between 133,000 and 212,000 jobs could be created if offshore wind power was fully exploited.  This is “more than three times the jobs estimate from proposed future expansion of offshore oil and gas drilling,” according to the report.

The comprehensive report details potential benefits to states along the eastern seaboard, which include:

The report also analyzes the economic impact and potential of offshore wind power, which all experts agree is considerably higher than onshore wind development.  But offshore wind power still comes in cheaper than oil and gas, according to the report:

For example, in the South Atlantic, offshore wind could heat more homes than offshore oil and natural gas resources combined, for less than half the price.

“Our research revealed that harnessing offshore wind power in Atlantic waters is a much more cost-effective way to generate energy than oil and gas drilling,” said Jacqueline Savitz, Oceana senior campaign director and analysis co-author.  “If we can get more energy for less money, create more jobs and protect our environment from spills, why not choose offshore wind over oil and gas?  We need a sensible energy policy and this research shows the way,” Savitz added.

The report is available here.