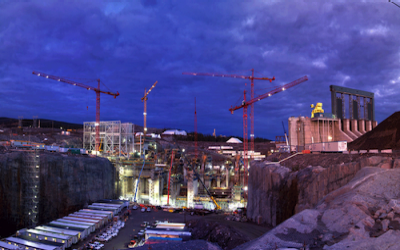 Nalcor Energy has issued a stop work order to Astaldi Canada Inc., the main contractor on its 824-MW Muskrat Falls hydro project, and is arranging for the company’s about 500 workers in Labrador to return home.

According to a statement from Nalcor Energy: “Given Astaldi’s inability to continue to pay its workers, Nalcor has directed Astaldi to stop work. We are taking this action to minimize the financial harm placed upon the workers by Astaldi.”

Astaldi Canada is a subsidiary of Astaldi, an Italian construction firm. In early October, it was reported that Astaldi Canada was facing $34 million in claims from suppliers over unpaid bills. Astaldi recently was admitted to the creditor protection process by a court in Rome.

Nalcor said this action will not affect ongoing work activities of other contractors on the site and their work will continue as planned. “Nalcor has financial insurance and securities in place that provide us with the necessary financial protection. We have also been working on a contingency plan to finish the work should Astaldi be unable to complete its remaining scope of work,” a statement says. The project should be generating its first power in 2019 and full power in 2020.

Muskrat Falls, on the Churchill River, has long been embroiled in controversy. In March 2018, the government announced it would be spending millions in 2018-19 to investigate the escalating cost for completing the project.