New Hampshire, USA — Recently, a reader emailed RenewableEnergyWorld.com to ask us a about a GHP (geothermal heat pump) that he installed in 2008. Two years after the GHP installation, he installed an electric water heater. Up until 2008, he had used propane to heat his Ohio home and hot water. The GHP took over the heating and cooling and then the electric water heater disengaged him completely from propane.

Geothermal heat pumps are sold to customers as a way to save on utility bills but that is not what happened in this case.  In fact, over the past 6 years, his electricity usage and costs have skyrocketed.  Today he uses more than three times the amount of electricity he used to use before making any changes to his system.  On average in 2008, he was using 982 kWh per month and paying $101 per month ($0.10 per kWh).  In 2013, his average monthly usage had gone to 3128 kWh and he was paying $328 per month ($0.095 per kWh because he switched to a new electricity provider).

Folks, I purchased a looped system in August 2008 and two years later bought an 80-gallon electric water heater connected to the GHP.

My electricity consumption has risen dramatically since the purchase of both the geothermal system and the water heater.  In this time frame, my wife and I became empty nesters which further causes my concern with the electrify use.  Additionally, we keep the internal temperature very low in the winter months, no higher than 64 degrees.  During the months where there is no need to heat or AC, the electric use is higher than before the GHP and water heater were installed.

I’ve had the installer to my home on several occasions and they say the system is working as designed.  I’m confused and concerned and not pleased with my purchase.   Help…please!

The newsroom was intrigued with this question and decided to take it on.  While we don’t sell or install GHP or electric water heater systems, we certainly know folks who do that exact thing.  So we collected some additional data from our reader, who keeps fastidious records, and forwarded it to Chris Williams of Heatspring.  Here’s what he had to say:

Almost any building science problem is impossible to answer virtually and this situation is no different. While I won’t be able to answer the question with certainty because there are too many “what ifs,” I’ll walk through the thought process that I would use if a good friend or relative were having this problem.

Did the installation company make a mistake or is his usage normal and to be expected?

The answer is that both are possible. The installation company could have made a mistake or the system could be operating well. The problem is that simply having the electricity use and a spot check of the system performance, from the same installer that did the work, doesn’t provide enough information to eliminate all of the “what ifs?” when trying to diagnose a potential problem.

Is he saving on his heating costs?

To try and answer this question, I did some back-of-the-napkin analysis.

This means that when he first installed his system, he was likely saving a small amount of money on his heating when compared with his propane bill. The homeowner said he was paying $150/month for propane, and if we deduce the average geothermal kWh use it would be around $138/month, a savings of $12/month. In today’s dollars, the price of geo is 1/3 the cost of propane, so he would save $3,000 per year.

The good news is that it appears his system is saving him a lot of money with the spike in propane prices. Given that there is a propane shortage in Ohio, it’s good that he made the switch.

When investigating operating costs for heating systems, it is necessary to examine the cost per million BTU (MMBTU). When propane is very cheap and electricity is relatively cheap, geothermal heat pumps will only save a small amount versus propane. In Ohio during 2007, electricity cost around $.10/kWh and propane around $1.30 per gallon. In this scenario, geothermal won’t save much, about $2 per MMBTU. Thus, if you had a house that required 100 MMBTU per heating system, the geo system would only save $200 at those prices.

The advantage of a geothermal heat pump is that the prices do not fluctuate rapidly — there is value in stability.

Today, with electricity around $.11/kWh and propane around $3.67/gal, geothermal is saving a lot of cash, around $22 per MMBTU. 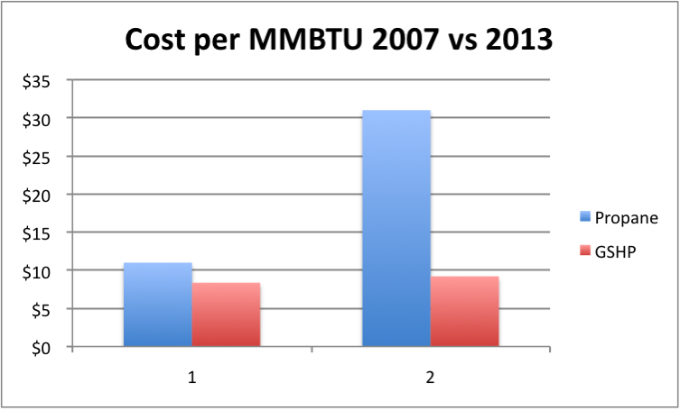 Given the propane system was 80 percent efficient, the geothermal system operated at a coefficient of performance (COP) of 3.5 in heating mode. You can see data taken from 100,000 hours of real time monitoring of actual geothermal COPs here.

This graph assumes a few critical elements that we don’t have information on from the homeowner:

The problem with this situation might have been simple over-promising or miscommunication of the savings on geothermal when the price of propane was cheap. Secondly, it sounds like the installer did a poor job at explaining how much their electricity use would increase, since heat pumps use electricity.

Is it typical to have your electricity use to significantly increase after an installation? If so, why?

Yes, electricity costs will often increase after the installation of any heat pump, including a ground source heat pump.

Energy.gov and Ground Energy Support do a great job explaining the basics of how the technology works.

Keep in mind that we’re not so concerned with the fact that his electricity bill increased or how much, it’s a more nuanced question. We’re concerned with how much of that increase is directly attributed to the geothermal system itself and how much he would have had to pay to heat his home to the same temperature with another fuel source.

In general, the amount that a homeowner’s electricity bill will increase depends on a few things.

If electricity use is significantly higher, what could be wrong?

This is hard to say, there’s a few more questions we would need to answer that could help to deduce the problem. The only real solution is to monitor the system in real time. The good news is that this technology is now cheap and accurate.

I asked Matt Davis and Ground Energy Support to help me answer this question. Matt’s an expert in real-time monitoring for geothermal heat pumps and specializes in helping homeowners monitor their geothermal heat pump systems so they can be 100% confident they’re running well and identify the exact problems with a system if it’s not.  He’s published a guide called The Homeowners Guide to Investing in Geothermal Heat Pumps.

Matt said he would want to get answers to a few more questions to determine more specifically what could be going wrong. Those include:

Spot-checking of the system means a technician checks a few temperatures and readings in a single instance. The problem with spot-checking is that it doesn’t provide very useful data about a system performance because it only provides a single snap shot in time.

“He says that his installer came to visit and said it was working fine. What about when his installer left? You need to do monitoring if you want to see how it is working in the middle of the night during the coldest part of the year. Your installer is probably not sitting there watching it then. Snapshots of performance can be misleading with a GSHP system as they do not track if and when auxiliary electric is coming on, how long it is on, and should it even be on or is it compensating for some deficiency. [A monitoring system] tracks cost savings using local and up-to-date comparison fuel costs based on actual heating load so the homeowner doesn’t need to do adjustments for price variations, variations in degree days, or changes in behavior. [Monitoring can] track BTUs, what they cost for geo and what they would have cost for other fuels.”

Chris Williams is the on the executive committee for the Massachusetts Clean Heat Bill, which will create a production based incentive for renewable thermal technologies and is the Chief Marketing Officer at HeatSpring, you can find him @topherwilliams.

Matt Davis is the co-founder of Ground Energy Support, which provides real time monitoring for geothermal heat pump systems to homeowners that want to make sure their systems are operating efficiently.