Utility companies were originally allowed as a public service and were not-for-profit. It was never intended that this public service be a money making business, let alone one of the largest and wealthiest in the country.

Utilities were given access to public lands as a Public Utility Easement (PUE) in order to deliver power to each house. The decision allowed the utility to be a monopoly in order to prevent a multiplicity of power lines going to each house.

Originally when the Arizona REST was established in 2006, The Arizona Corporation Commission (ACC) saw the value of solar electric power. It was touted as the best thing to help Arizona — ever. It established a roadmap that was gentle and beneficial for the entire state: reach 15 percent renewable power by the year 2025.

As of this moment, with the new ACC’s direction, that goal cannot and will not be met. With passage and the Arizona Department of Revenue’s (AZ DOR) interpretation of HB2595, which enforces an additional fee on solar customers, solar DG will likely die in the state of Arizona.

The Utility Monopoly Must Change

Utilities have long enjoyed the monopoly control over power production but in my opinion there is nothing that can be done to stop this change from taking place. Right now, the renewable energy arena employs more people that all of the coal industries combined. More energy is now being made in the USA by solar electric sources than all of the hydroelectric power plants combined.

Every American should have the right to produce his or her own power from the sun without the utility company standing in the way. At a renewable energy summit in 2011, Governor Jan Brewer stated that Arizona needs to be the “sun” state and the country’s leader in solar power. She said Arizona should start selling solar power to other states and take advantage of its number one natural resource. She was right.

However, now she hasn’t vetoed the ACC’s decision to allow APS to add a tax to solar customers. She also isn’t showing leadership by directing the Arizona Department of Revenue to eliminate HB2595 which adds a property tax to solar electric systems. No one understands why the Republican-led ACC would think that the taxpayers want another tax. Recent surveys show 77 percent of citizens said they would not vote for a candidate that opposed solar electric power in Arizona.

Utility companies say that solar DG customers cost them more money than large consumers of their power. This is nonsense.

At the APS “Cost Shifting” ACC meetings in December 2013, absolutely zero data was presented that proved that DG customers actually cause a financial burden to APS or the utility companies power lines and distribution system. At the meeting there were over 2,000 supporters of solar DG and only a handful of utility supporters. Over 200 people (myself included) presented data about solar DG benefits. There was no data to support utility claims that solar DG causes a financial burden on the grid. Despite this evidence, the ACC, led by Gary Pierce and Brenda Burns, decided against the majority of the citizens and allowed APS to add the unfair tax on solar customers.

When the utility says it has to pay more money because of solar DG customers it is not taking into account the funds it is are collecting.

For only 0.9 percent of utility customers, that is a sizeable amount of line usage and maintenance funds. Suggestion: If the AZ DOR and ACC want to tax solar DG customers, it would be fair to tax APS $1/kWh for power generated by Arizona’s sun and add it to the Arizona Department of Commerce to support state solar incentives.

Baseline Connection Fee vs. Wear and Tear by High Usage

When a utility company makes power they have fuel costs, generation costs, and distribution losses. When DG customers generate their own power, 90 percent is used on site. The other 10 percent goes to direct adjacent neighbors. It does not go to the transfer station, transmission lines or power plants. The utility company receives the power at no cost during daytime peak hours, sells the same power at peak rates and is not subject to the fuel costs, generation costs or distribution losses.

The distasteful commercials funded by out-of-state utility supporters, including Duke Energy, Edison Electric Institute and the Koch Brothers, stated that solar DG customers don’t pay their fair share of line maintenance. They’ve spent over $9 million for these negative ads, which are incorrect and misleading.

The graph below depicts the baseline charge or “connection fee” that all customers pay. It also shows that as the customer uses more power, there is more wear and tear on the distribution system. If the utility company were to be fair and accurate with their statements and charges for using the grid, they would charge more to the large power users. 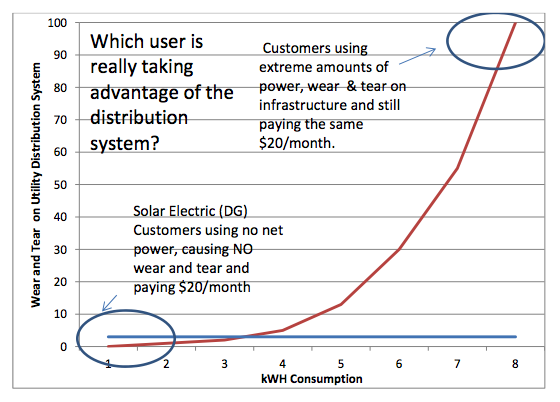 Adding an additional tax to solar DG customers, the lowest users of the distribution grid, is unfair.

The baseline connection fee is for administrative, accounting, meter reading fees, etc. It is not for power generation and distribution. If the basic connection fee doesn’t cover costs of connectivity to the grid, fix the cost model and apply it fairly and unilaterally to all utility customers, not just the solar DG customers.

Utility companies are trying to discourage the growth of solar DG customers and build their own solar power plants where they get the revenue from the free source of power. Utilities would rather offer power generated by their owner solar farms at a premium even though the 30-year cost of generation to be significantly lower than all other power sources.

Why do APS and SRP invest in out-of-state power sources instead of in-state solar power? This leads to the assumption that they are fighting the growth of solar DG in the state and are only interested in their bottom line.

It is time for a bill to support and establish the sun as Arizona’s number one natural resource and assure the permanent and future financial strength of the state. This bill should stop all attempts that take any action to “tax the sun.”