More
Home Baseload Are We There Yet? The Positioning and Repositioning of the Algae Industry

An agreeable reporter from KPBS San Diego visited with the Digest this past week while working on a short segment, contrasting the progress of algae companies today to the promise seen when the BIO International Convention last visited San Diego in 2008.

The premise of the article was “Then, there was a lot of talk about fuels. Today, there’s more talk about nutraceuticals, food and feed. What happened?”

There are good reasons to ask hard questions.

Then, it was Aurora Biofuels — now it’s Aurora Algae. Then, it was Solix Biofuels, now it is Solix Biosystems. Then, Solazyme was generally focused on being a fuel company, now it is a “renewable oils” company more focused on higher-value, higher-margin products like Encapso drilling oils and Algenist health & beauty products.

Then, it was “the summer of algae,” and ExxonMobil was running an awful lot of commercials about its investments in algae-based fuels. Now, the commercials are long gone.

Have the Market Drivers Really Changed?

Recently here in Digestville, we had an opportunity to look back at the Algae 2020 study that Emerging Markets released back in 2009, at the height of the algae craze.

He described algae then as one feedstock for “a diversified portfolio of products,” noting that “algae products are and will be used to manufacture fuel, feed, food, fertilizer, plastics and green chemicals. Algae meal will be a protein supplement for aquatic and livestock/poultry feeds. Noting at the time that 30 percent of the biomass would likely be the algae oil fraction for biofuels and green chemicals.

He noted in 2009 that “the higher-value, multi-product focus is essential for cash flow for start-ups, and part of a diversified, targeted marketing strategy to generate revenues.” 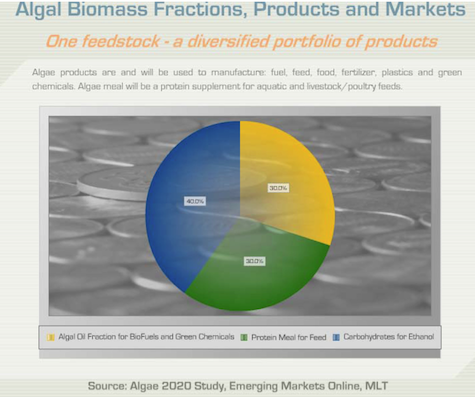 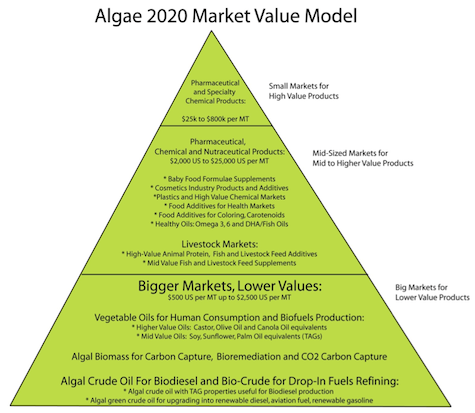 He modeled a market that focused first on pharmaceutical and specialty chemical products based on prices between $25,000 to $800,000 per metric ton — during the 2009-2012 period.

During the 2011-2015 period, he pegged that pharmaceutical, chemical and nutraceutical markets would dominate, with price points between $2000 and $25,000 per metric ton, including: omega-3s, food additives, plastics and high value chemicals, cosmetic industry products and additives, baby formula supplements, and livestock markets with higher-value animal protein, fish and livestock feed additives.

Fuel markets, he projected would come later — depending on the scale of the ventures involved, he pegged a 2018-2025 timeline. 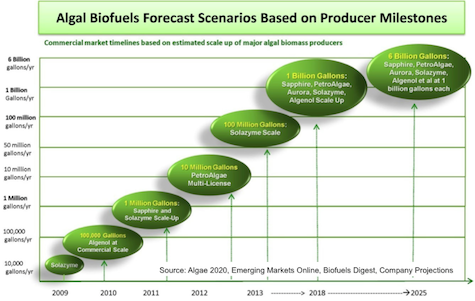 So — have algae companies repositioned? Not really. Some investors and quick-buck artists have moved on. But crop-based investors have arrived on the scene.

ADM has partnered with Solazyme to place production at its Clinton, IA facility. Bunge has established a massive JV with Solazyme, and the two are reaching commercial-scale down in Brazil just now. Monsanto has invested in Sapphire Energy, looking not only to empower a new crop, but possibly to find attractive traits in algae that can be adapted in other crops of interest. And the Mars family — owners of huge pet food and human nutrition brands — has invested deeply in Heliae. 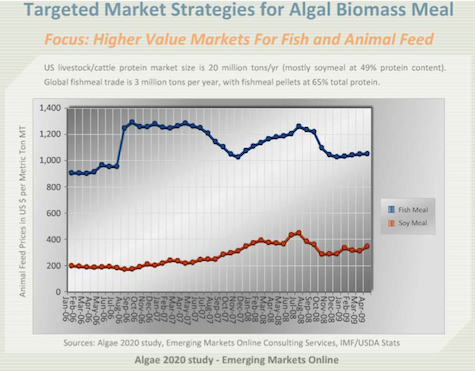 Though, it is not all upstream companies. Valero remains invested in Algenol, Phillips 66 has partnered with Sapphire Energy, and India’s refining giant Reliance Industries has invested quite a lot of money in recent years, also primarily in Algenol. DSM has invested more deeply in acquiring Martek.

Delays there have been — some of it pegged to the food and feed markets. For example, Aurora Algae, which has been working hard at its business for seven years now, is just this year hoping to receive GRAS (generally regarded as safe) approval for its protein — essential to releasing a product to the market.

Now, in the case of 30 percent oil content — excepting companies that pyrolize the entire algae biomass — there are going to be 3.3 pounds of proteins and carbs for every pound of oils. So those USDA approvals, slow though they are, are critical to making fuels, as well.

So what happened? To some extent, occasional observers have been influenced by the television commercials. Even in the “summer of algae”, the dominant production capacity was owned by Cyanotech, Earthrise and Martek — all focused on nutraceuticals. 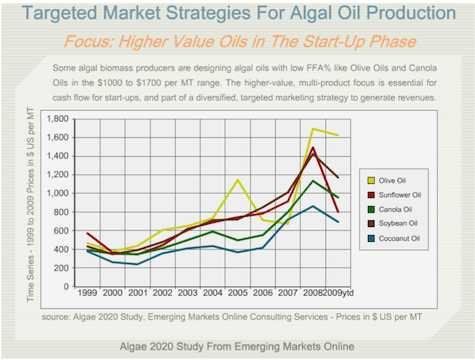 It took 56 years from the Titusville oil strike in Pennsylvania until petroleum was generally dominant in road transportation fuels.

Petroleum started out as a replacement for, by and large, heating and lamp oil. The concern of the era was not Peak Oil, but Peak Whale — as whale oil supplies were not able to keep up with expanding demand. Then, gasoline was often discarded as a waste by-product. And it wasn’t until World War II that petroleum began to comprehensively replace coal as a feedstock for chemicals — more than 80 years after Titusville.

What is being built are crop companies, not fuel companies or nutraceutical companies. They’ll sell their biomass to the highest bidder. As Will Thurmond projected five years ago, these are the “middle years” where the focus is on “omega-3s, food additives, plastics and high value chemicals, cosmetic industry products and additives, baby formula supplements, and livestock markets with higher-value animal protein, fish and livestock feed additives.”

How soon will individual companies get down their cost curve and into the bigger chemical and fuel markets? Algenol CEO Paul Woods is projects a cost of $1.27 per gallon for ethanol. Solazyme’s 100,000 metric ton plant is now open for business. But we won’t likely see fuels until the higher value markets are saturated — and, in this way, the innovation going on at algae companies — developing new higher-value formulations — may well be pushing that day out rather than making it closer.