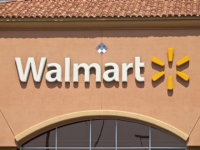 In 2005, when atmospheric CO2 had climbed to 379 parts per million and Walmart’s public approval rating had fallen to an all-time low, the company’s then-CEO Lee Scott made a dramatic announcement. “Every company has a responsibility to reduce greenhouse gases as quickly as it can,” Scott declared. He then pledged that Walmart would shift to 100 percent renewable power and become a leader on sustainability.

Nine years later, atmospheric CO2 has passed 400 parts per million.  Walmart is facing even more criticism over its labor practices.  And, despite producing a steady stream of solar panel photo-ops and press releases on sustainability, Walmart’s greenhouse gas emissions are higher than ever.  Today, Walmart derives just 4 percent of the electricity for its U.S. stores from its wind contracts and solar installations.

What happened?  The short answer is that the scale of Walmart’s renewable energy efforts are no where near the scale of the company’s operations.  As the Institute for Local Self-Reliance documented in a recent report, Walmart’s investment in sustainability extends just far enough to change its public image, but not so far as to change its business model and its impact on the planet.

Walmart’s progress on renewable power is particularly pitiful when you look at other retailers.  Staples, Kohl’s, and Whole Foods, along with numerous small businesses, have already passed the 100 percent renewable power mark.  Starbucks and McDonalds are also way ahead of Walmart.

In fact, Walmart’s renewable power usage peaked in 2011 and has declined since then.  In its 2013 Global Responsibility Report, the company explains the decline: “Walmart U.S. was unable to renegotiate an expiring contract [for renewable power] with competitive pricing.”  Last week, Walmart reported that it pays less for its renewable power than the cost of conventional electricity.

In other words, Walmart wants to be seen as leader on the environment, even though it refuses to invest in sustainability beyond what pure profit-maximizing would entail.  It’s not for lack of cash either: Walmart had $17 billion in profits last year.  The Walton family, which owns half of Walmart stock, is reportedly worth $145 billion.

Walmart’s global greenhouse gas emissions have grown 14 percent since its 2005 climate declaration.  Even more troubling is the fact that, in reporting its climate footprint, Walmart does not account for large and fast-growing sources of greenhouse gas emissions its operations.  It ignores international shipping, for example, despite being one of the largest shippers on the planet with imports to the U.S. growing 247 percent since 1990.  According to the International Maritime Organization, ocean shipping’s contribution to climate change is skyrocketing. Yet Walmart is silent on the issue.

Perhaps most concerning of all is Walmart’s impact on the politics of climate change. Walmart is one of the largest corporate campaign donors in the country and it gives the bulk of its money (over $3.6 million dollars in the 2012 cycle) to lawmakers who regularly vote against the environment. In 2008, 80 percent of Walmart’s Senate campaign contributions went to senators who blocked the Lieberman-Warner cap-and-trade bill. In 2012, 69 percent of Walmart’s federal contributions went to lawmakers who voted for the Keystone XL pipeline.

As corporate sustainability experts Auden Schendler and Michael Toffel argued in an article last year, “Businesses that claim to be green but aren’t loudly making their voices heard on the need for government action on climate change are missing the point. They are not just dodging the key challenge of sustainability; they are distracting us from what really matters.”

So, how has Walmart so far escaped accountability for its environmental claims? Skillful public relations, mixed with just enough real action, is part of the answer.  The other is that the environmental community initially gave Walmart room to make good on is promises.  That’s starting to change, however.  Inspired by Walmart workers who have led an unprecedented series of strikes and actions against the company in recent months, environmentalists are now joining forces in calling on Walmart to change its ways.

In November, leading environmental organizations, including Greenpeace, Sierra Club, and Rainforest Forest Action, issued an open letter calling on Walmart to make real progress on climate emissions.  Now Environmental Action is leading a grassroots campaign that has already attracted over 30,000 signatures. Rather than falling sway to Walmart’s greenwashing campaign, we are committed to confronting its business practices head-on, demanding far more for workers, communities, and the environment.