More
Home Baseload Bioenergy Are the Declines in Solar and Wind Stocks Structural or Cyclical? 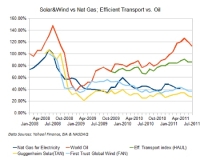 Last week, I asked three green money managers if they thought cleantech stocks, especially solar and wind sectors, were near a bottom. While they did tell me about eight cleantech value stocks, they were not ready to call the bottom.

In response to my questions, Rafael Coven, the manager of the Cleantech Index (^CTIUS), which is the index behind the Powershares Cleantech Portfolio ETF (PZD), told me that he and his colleagues at the Cleantech Group

“are continually reminded how fast certain sectors have product commoditization, where intellectual property isn’t strong enough to differentiate products sufficiently, then prices have been collapsing even faster than we had anticipated.  This is true for smart power meters, solar panels, wind turbines, and most lighting products – especially LEDs….Sector growth doesn’t necessarily mean that many companies will make economic profits in LED lighting or solar PV.”

In other words, Coven sees the decline in solar PV stocks to be a consequence of changing market structures.  If he is right, there is no reason to expect investors in sectors which have experienced the rapid commoditization to ever recover their losses.  Just because these stocks look cheap based on historic earnings, they could easily continue to fall.

“[S]olar and wind have underperformed the more broadly defined cleantech sectors because China is subsidizing the manufacturing ramp of those industries and creating overcapacity.  Commensurate with pricing pressure due to the supply and demand imbalances are raising commodity costs like steel, silver, copper which pressures margins for solar and wind manufacturers throughout the value chain.”

Commoditization is not the only potential structural problem in clean energy.  I also corresponded last week with Robert Wilder, the manager of the Wilderhill Clean Energy Index (ECO) and the Wilderhill Progressive Energy Index (WHPRO).   The largest clean energy ETF, PBW is based on ECO, while the Powershares Wilderhill Progressive Energy Portfolio (PUW) is based on WHPRO.  Wilder and I were discussing why broad-based ETFs such as PUW and Coven’s PZD had outperformed narrower clean energy indexes like PBW recently.  Wilder says,

“Indexes capturing broader themes simply had been able to avoid the narrow, sharp drop. A wider Index for say, cleaner technology with lesser green energy weightings would in a sense do ‘better’ the past couple years, while Progressive energy emphasizing efficiency and the smart use of dominant energy would do even ‘better’ than that.”

In addition to the quick commoditization arising from the rise of Chinese manufacturers, Wilder and Hempleman also see structural problems for solar PV and wind in the reduction of subsidies.  Wilder says that the paring back of subsidies has quickened recently as “several governments are suddenly fiscally flat on their back. One-off events like Japan’s nuclear crisis, or sharp doubling in oil prices, spotlight moves to new energy in places like Germany, but that alone is not enough to offset these partly structural near term structural forces.”  Hempleman adds that “this is a major structural issue as many of the companies that compete in these sectors are highly levered and the barriers to entry are fairly low.”

While Wilder and Hempleman see the recent decline as mostly structural, Wilder also sees some cyclical causes.  He sees an analogy to semiconductor makers, which go through boom and bust as wafer makers over-expand, and then are forced to contract. But he sees the forces driving down solar, wind, LEDs and geothermal in recent times as much more powerful than those in the semiconductor industry.

Garvin Jabusch, manager of The Sierra Club Green Alpha Portfolio, emphasizes more cyclical causes.  He sees a big driver of the decline in the solar and wind stocks to be the political shift against pricing in fossil fuels’ externalities, such as the effects of global warming, increased health care costs caused by pollution, and the costs of going to war for oil.  “These costs have not been accounted for in the economics of fossil fuels, but if the international political economy is ultimately rational, sooner or later (preferably sooner) they must be…[E]merging scale and accurate pricing of combustion’s externalities will inexorably reverse this trend,” he said.

Hence, if politics is cyclical (mean-reverting or “ultimately rational”) then political drivers for renewable energy will be cyclical as well.  And right now he sees the political pendulum swinging to the extreme detriment of renewable energy due to disinformation.  “Polls show that (in the U.S. anyway), this [disinformation] is working. Except for a very recent rebound in belief in global warming, the last two years have seen a general decline in belief in warming science among Americans, particularly but not exclusively among conservatives.  It’s hard not to notice that this period of declining belief has approximately corresponded to the period of declining valuation, and increasing short interest (some solar companies have had short interest as high as 30-40 percent of total float), among renewables.”

Jabusch also scoffs a bit at the commoditization argument.  He says that as the price of solar declines to the point where it becomes competitive with fossil fuels such as coal, “some of the same analysts who derided renewables’ expense now deride their inexpensiveness as ‘commoditization’ and ‘margin squeezing’ that means solar companies can’t make much money going forward. To me, these guys are missing the point that the rapid, large reductions in the price of solar, which by the way show every sign of continuing, mean that solar will now begin to supplant coal far faster than anyone could foresee even five years ago.”

I think it’s fairly safe to conclude that both structural and cyclical factors have been at work in the recent declines of solar, wind, LED and geothermal stocks.  For the investor, the question should be: Have the structural factors and most of the cyclical factors been fully priced in?  If so, these stocks will benefit as cyclical factors begin to reverse themselves.  If, however, the full effects of the structural problems in these industries have yet to be felt, then even a political and cultural shift back towards pricing in the full costs of fossil fuels may not be enough to make the current batch of solar and wind stocks profitable again.

For myself, I find the bears’ structural arguments more convincing.  While I think Jabusch is right that the political pendulum will swing back in favor of the recognition of the harm done by fossil fuels, the resurgence of the solar and wind industries in terms of volume may be a great boon to society, yet still fail to return great profits to the current shareholders of solar and wind companies.  This is because a new, more clean-energy-friendly political environment may draw in new competitors to these industries, further increasing pricing pressure and preventing solar and wind companies from “more than mak[ing] up in volume what they’re losing in margins,” as Jabusch predicts.

It is possible to do well by doing good.  As Rob Wilder points out, “an Index capturing global energy efficiency in transportation is well up” over the same period solar and wind have been down.  I think that’s probably due to the fact that transportation efficiency competes with oil, and the price of oil is up 50 percent over the last two years.

Solar, wind, geothermal and electrical efficiency technologies such as demand response and LEDs compete with the marginal supplier of electricity, which in most of the developed world is natural gas, and the natural gas price has been very low since early 2009 compared to 2004-2008.  This is why many renewable developers are now focusing more on developing countries where it is possible to displace oil in electricity generation.

Unfortunately, as with the trends in renewable energy, I think the recent trends in oil and natural gas have both structural and cyclical factors.  Which of those factors will dominate over the next two years is beyond this analyst’s expertise to predict.  Over the long term, though, the trend for fossil fuel prices is likely to be up.