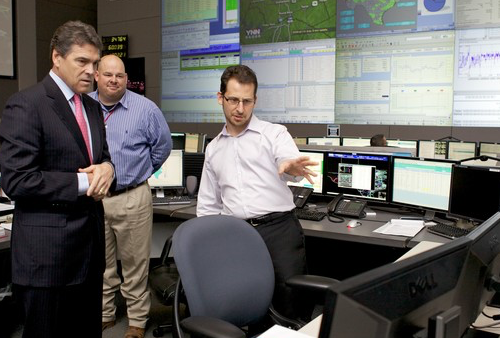 U.S. Secretary of Energy Rick Perry in April requested a study to assess the effect of renewable energy policies on nuclear and coal-fired power plants.

Some energy analysts responded with confusion, as the subject has been extensively studied by grid operators and the Department of Energy’s own national labs. Others were more critical, saying the intent of the review is to favor the use of nuclear and coal over renewable sources.

To understand why, we need to trace the path of electrons from the wall socket back to power generators and the markets and policies that dictate that flow. As energy scholars based in Texas — the national leader in wind — we’ve seen these dynamics play out over the past decade, including when Perry was governor.

There has been a lot of ink spilled on why coal is in trouble. A quick recap: Natural gas is plentiful and cheap. Our coal fleet is old and depreciated. Energy use in the U.S. has flatlined, so there’s less financial incentive to build big new power plants.

Part of Perry’s review is aimed at establishing how wind and solar, which are variable sources of power, are affecting so-called baseload sources — the power plants that provide the steady flow of electricity needed to meet the minimum demand.

Posing the question whether wind and solar are killing baseload generators, including coal plants, reveals an antiquated mindset about power markets that hasn’t been relevant in many places for at least a decade. It would be similar to asking in the late 1990s whether email was killing fax machines and snail mail. The answer would have been an unequivocal “yes” followed by cheers of “hallelujah” and “it’s about time” because both had bumped into the limits of their utility. How quickly 1990s consumers leaped to something faster, less impactful and cheaper than the older approach was a sign that they were ready for it.

Something similar is happening in today’s power markets, as customers again choose faster, less impactful, cheaper options — namely wind, solar and natural gas plants that quickly boost or cut their output — as opposed to clinging to the outdated, lumbering options developed decades before. Even the Department of Energy’s own analysis states that “many of the old paradigms that govern the (electricity) sector are also evolving.”

Wind and solar are making older generators less viable because their low, stable prices and emissions-free operation are desirable. And they aren’t hurting grid reliability the way critics had assumed because other innovations have happened simultaneously.

Let’s use the case study of Texas to illustrate. Since Texas has its own grid, known as the Electricity Reliability Council of Texas or ERCOT, and has installed more wind capacity than the next three wind-leading states combined, the Texas experience shows what variable renewables like wind power do to the grid.

In competitive markets like ERCOT, companies that run power plants place bids into an auction to provide electricity at a certain time for a certain price. A bid stack is jargon for “a stack of bids” — or the collection of all these bids lined up in order by price — in auction-based markets (such as Texas).

An illustration of the electricity market bid stack for the ERCOT grid in Texas. Generators line up left to right from the lowest cost to highest cost every five minutes. As demand changes throughout the day, the ‘marginal generator,’ or the last power plant called to provide power, sets the price that every plant providing power (left of the vertical black line) is paid. Power plants to the right of the line are not dispatched and thus do not receive payment in an energy-only market. (NG CC = Natural Gas Combined Cycle; NG Other = NG boilers and combustion turbines). University of Texas at Austin, CC BY

When gas drops into to the range of US$3 to $3.50 (per million BTU) and lower, it begins to displace coal as a less expensive source of electricity. This scenario reflects today’s reality: gas is cheap so grids are using it for more of our electricity than coal.

Illustration of a bid stack with a fixed load and declining prices for natural gas, resulting in coal being forced to the right side of the bid stack. Moving to the right of the stack means that the power plant is not dispatched because there are other more economical options for producing electricity, in this case, NG CC. (NG CC = Natural Gas Combined Cycle; NG Other = NG boilers and combustion turbines). University of Texas at Austin, CC BY

How do renewables affect the bid stack? Renewable sources such as wind, solar and hydro have no fuel costs — sunlight, wind and flowing water are free. That means their marginal operational cost is near zero; the cost is essentially the same to operate one megawatt of wind as compared to the cost of operating 10 megawatts of wind since generators don’t need to buy fuel. That means as more wind and solar farms are installed, more capacity is inserted at the cheapest end of the bid stack.

This insertion pushes out other generators such as nuclear, natural gas and coal, causing some of them to no longer be dispatched into the grid — that is, they don’t supply power into the grid (or get paid). So as more renewables are installed, power markets dispatch fewer conventional options. And, because the marginal cost of these new sources is almost free, they substantially lower the cost for electricity. This is great news for consumers (all of us) as our bills decrease, but bad news for competitors (such as coal plant owners) who operate their plants less often and are paid less when the plants do operate.

Increasing the installed capacity of renewable energy (e.g., wind and solar) on the bid stack shifts generators with conventional fuels such as nuclear, coal and natural gas to the right. Since renewable sources have near-zero marginal costs since there is no cost for fuels, they are dispatched first and reduce the market price for electricity. (NG CC = Natural Gas Combined Cycle; NG Other = NG boilers and combustion turbines.) University of Texas at Austin

What does all this mean? Natural gas and renewables are affecting coal in two ways. Natural gas is a direct competitor with coal because both can be dispatched — turned on — when a grid operator needs more power. That is helpful for grid reliability. But, as the cost of natural gas has fallen, coal has become less competitive because it is cheaper to operate a natural gas power plant.

The effect of renewables is slightly different: Wind and solar power are not dispatchable, so they cannot be turned on at a moment’s notice. But, when they do turn on, during windy evenings or sunny days in Texas, they operate at very low marginal cost and thus operate very competitively.

Research at UT Austin shows that while installing significant amounts of solar power would increase annual grid management costs by $10 million in ERCOT, it would reduce annual wholesale electricity costs by $900 million. The result of all this is that renewables compete with conventional sources of power, but they do not displace nearly as much coal as cheap natural gas. In fact, cheap gas displaces, on average, more than twice as much coal than renewables have in ERCOT.

Today, cheap gas, having already beaten up on coal, is a threat to new nuclear power plants and less efficient, older plants. New natural gas combined cycle power plants can be built for about one-sixth the cost of a new nuclear plant, is almost twice as efficient and you can build them in smaller increments, making them easier to finance.

Market Innovation and IT Can Fix Reliability

Because wind energy comes and goes with the weather, it makes grid operators nervous. But wind forecasting has improved dramatically, giving more confidence to those who need to keep the lights on.

And, interestingly enough, the requirements for reserve capacity (backup power for when wind power dips) to manage the grid smoothly went down, not up, over the past few years in Texas, despite rapid growth in wind during Governor Perry’s tenure. That is, the costs for managing variability in the grid decreased.

Why has there been little disruption to the reliability of the Texas grid? Because alongside rapid growth in wind installations was a market transformation in ERCOT. While Secretary Perry was governor, the Texas market went from a coarse, slow market to a fine-tuned, fast market. Innovating the market to one that is dynamic and fully functioning made it easy to include more wind into the system. It’s also a sign of how advanced technologies enable us to reinvent the grid toward one that is cheaper, cleaner and more reliable. 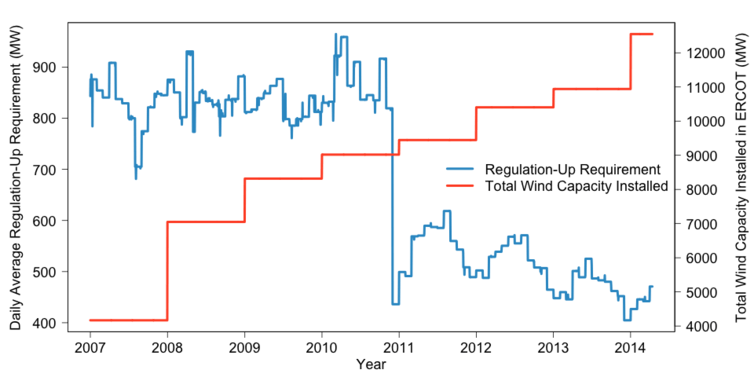 But there is still more to do — information technology coupled with integrated hardware can help. Consider this: There are 7.7 million smart meters in Texas, most of them residential. We’ve estimated that installing 7 million controllable thermostats for just the households in Texas would cost $2 billion. Residential air conditioning is responsible for about 50 percent of peak demand in Texas in the summer. That means about 30 gigawatts of peak demand in Texas is just from residential air conditioners.

By dynamically managing our air conditioning loads — that is, adjusting thermostats to lower overall demand without impacting people’s comfort — we could reduce peak demand by 10 to 15 GW. That means we might not need $10 billion to $15 billion worth of power plants. Spending $2 billion to avoid $15 billion is a good deal for consumers. In fact, you could give the thermostat away for free and pay each household $700 for their trouble and it would still be cheaper than any power plant we can build.

In the end, Secretary Perry has posed good questions. Thankfully, because of lessons learned while he was governor of Texas, we already have answers: despite concerns to the contrary, incorporating wind and solar into the grid along with fast-ramping natural gas, smart market designs and integrated load control systems will lead to a cleaner, cheaper, more reliable grid.