New Hampshire, U.S.A. — Greenpeace advocates gathered outside of Apple’s Cupertino headquarters early this week dressed as iPhones and iPods, declaring their outrage about the company’s lack of clean energy use. They projected social media messages from supporters on the side of the building:

“Be part of the next century, not the last.”

This protest is just a small part of what Greenpeace has been campaigning for months: How Clean is Your Cloud? According to its report, most major tech companies rely on coal to power their data centers and manufacturing – Apple scored a “D” on its renewable score sheet, while Google and Yahoo led the clean energy movement in the sector, scoring an “A” and “B” respectively, in both usage and policy support. And despite a relatively flat national electricity demand over the past year, data center electricity demand increased 19 percent in 2012 to 31 GW globally, with $450 billion spent annually on new centers.

In response to this outcry, Apple announced yesterday that its new data center in Malden, North Carolina, which will draw about 20-MW of power at full capacity, would be powered by 100 percent renewable energy, with 60 percent coming from onsite solar and fuel cells. According to its website, Apple is currently building two solar installations – a 20-MW project on 100 acres near its data center and another 100-acre installation a few miles away. Apple is also building a 5-MW biogas-powered fuel cell set to come online later this year. 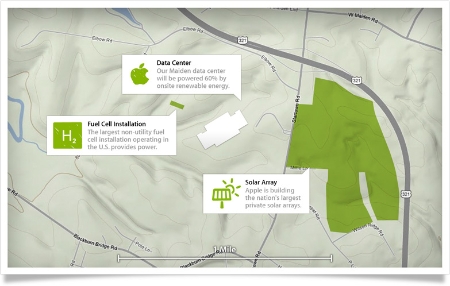 The remaining 40 percent of renewable power will be purchased from local and regional sources. To encourage renewable growth in the region, Apple partnered with NC Greenpower, a local organization committed to increase renewables in the state, and is already working to generate electricity from methane gas at a local landfill.

According to Apple, “Adding renewable energy sources like these displaces dirtier energy sources from the grid. Directly purchasing clean local energy gives us the flexibility to meet our needs over time, helps us to ensure that our sources are reputable and responsible, and encourages local investment in renewable projects such as wind, solar, and bio-gas power in locations best suited for these resources.”

In addition to its Malden facility, Apple plans to fully power with renewables its facilities in Prineville, Oregon and Newark, California by February 2013.