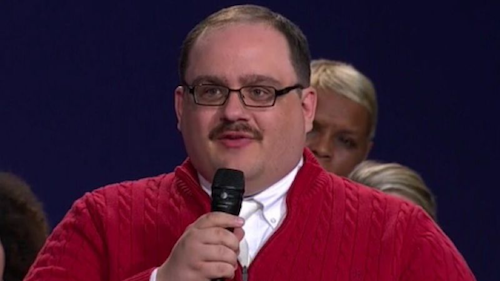 Have you noticed something missing from the presidential campaigns lately? I mean other than veracity, high principles and civility.

Global warming seems to have left the building about the time Sanders did.  Although the question of climate change has been raised a lot lately, it has been mostly by movie stars, pundits and bloggers like me asking: “why the candidates aren’t talking about it?”  Inconvenient though it may be, I don’t think it particularly surprising.

The most prominent mention of the topic since the summer’s nominating conventions was made towards the end of the second presidential debate, when a be-sweatered, beatified and, ultimately, berated Ken Bone asked the candidates:

What steps will your energy policy take to meet our energy needs, while at the same time remaining environmentally-friendly and
minimizing job loss for fossil power plant workers?

To which Donald replied:

Such a great question because energy is under siege by the  Obama administration.  The EPA, Environmental Protection Agency, is killing these energy companies. And foreign companies are now coming in.  Now I am all for alternative forms of energy including: wind and solar, etc. But we need much more… Hillary…wants to put the miners out of business…I will bring our energy companies back…go to a great place like West Virginia or places like Ohio…or …Pennsylvania…see what they are doing to the people, miners and others in the energy business. It’s a disgrace.

To which Hillary responded (emphasis mine):

We are however producing a lot of natural gas that serves as a bridge to more renewable fuels…I think that’s an important transition.
We’ve got to remain energy independent…I have a comprehensive energy policy, but it really does include fighting climate change because I think that is a serious problem. And I support moving towards more clean renewable energy as quickly as we can. Because I think we can be the 21st century clean energy superpower and create millions of new jobs and businesses. But I want to be sure that we don’t leave people behind. That’s why I’m the only candidate from the very beginning of this campaign who had a plan to help us revitalize coal country.

After which, the campaigns went back to battering each other as usual about things other than global warming and what they would do about it.

Over the past year numerous polls have shown Americans’ willingness to believe the scientists and to pay extra for electricity generated by clean energy sources as well as support for climate action.  Senator Sanders and others, including the billionaire activist and political contributor Tom Steyer and the actor Leonardo DiCaprio, have spent significant time and resources educating voters about the problem.

President Obama has made it a priority of his last years in office, ordering the U.S. Environmental Protection Agency to draft the Clean Power Plan.  Pope Francis issued Laudato si’, mi’ Signore, a 200 page encyclical, echoing the teachings of St. Francis of Assisi and encouraging Catholics and non-Catholics alike to care for our common home.

So why—with voters indicating their desire to act and all of these heavy hitters extolling, urging and cajoling Americans to recognize global warming as one of the more significant problems facing future generations—have the candidates not addressed this issue more prominently?

The fact is that climate change remains one of the more contentious, divisive and over appreciated issues.  According to the Christian Science Monitor (CSM):

This disagrees rather dramatically with a New York Times/Stanford University/Resources for the Future poll conducted in January of 2015
that concluded:

An overwhelming majority of the American public, including half of Republicans, support government action to curb global warming…

And, that voters were:

…more likely to vote for political candidates (in the 2016 election) who campaign on fighting …global warming.

A Stanford University poli-sci professor, and an author of the survey, called this particular conclusion the most powerful finding of the poll. Assuming the recent CSM conclusion is a more accurate reflection of what voters believe today, what caused the finding of the earlier poll to fizzle?

Actually, nothing has happened—that wasn’t already happening.  Numerous polls over the years have claimed climate change advocates and the scientific community are making headway in their efforts to educate voters, consumers and political decision makers of the truth and consequences of global warming and to encourage action.  Like the January 2015 survey, the difference between fact and opinion was significant.

The fault is not in the finding; it is in failing to understand where on the list of priorities they place the issue and what they are really willing to do about it.  Just as the pollsters misread the depth of anger and frustration of voters in the 2016 elections, too much is made of respondents answering “yes” when asked global warming is bad.

This is particularly the case in polls like that reported by the New York Times.  Most of the questions were prefaced by words like “assuming it is happening,” and “if nothing is done about it.”

If I asked you: “assuming you have cancer and are going to die tomorrow, how you would feel about it.”  I venture you would say: “lousy.” 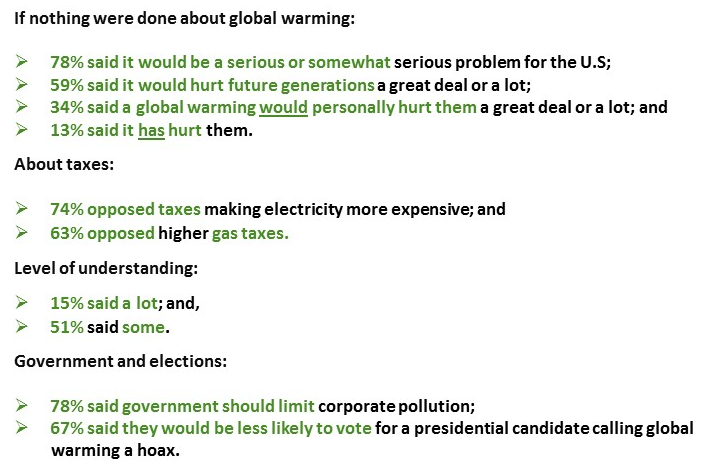 Like contemplating one’s own death, the size of the universe, if aliens exist and whether Earth could be wiped out by a meteor—some problems are just too personal or too colossal to imagine.

We humans tend to break things down in understandable bits—reconcile big problems by envisioning their consequences as happening sometime in an ill-defined future—putting near-term economics ahead of future problems.  Would someone admit that global warming is a serious problem and oppose measures to avoid it—otherwise?

Pollsters do renewable energy and environmental advocates a disservice by glossing over the difference between answers and actions.  Why else would the CSM poll show a nation with 78 percent of the population believing global warming a serious problem, also leading the world in its unwillingness to do anything about it?

Take comfort that more people are willing to admit to the possibility of global warming.  Do not, however, forget the lesson of the 2016 election—it is not at the top of most people’s list of things to do. 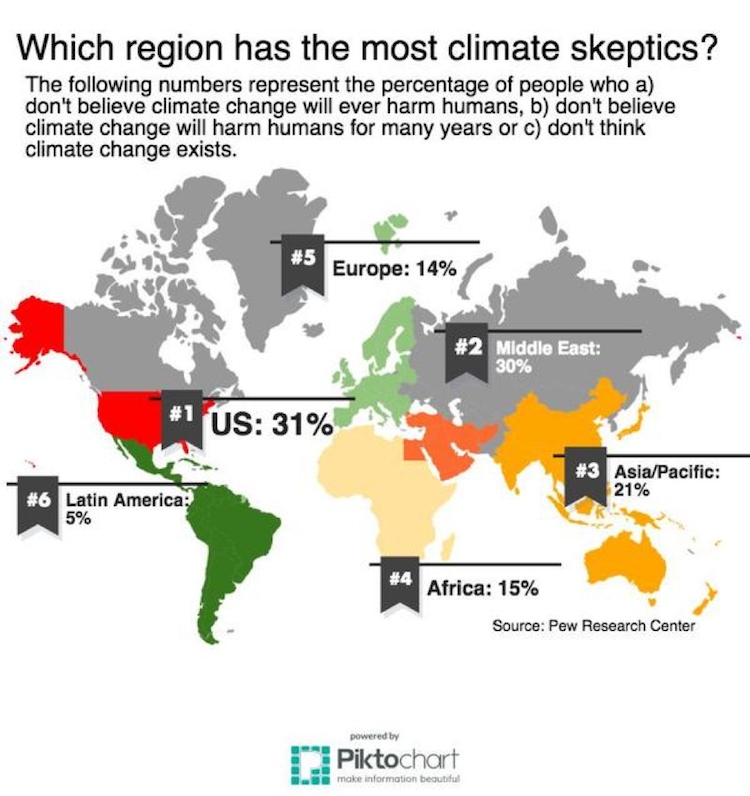