New Hampshire, USA — The ring of fire is a geologic region that extends in a horseshoe shape from the bottom tip of South America, up along the Pacific coast through North America, and looping back through Asia and down to New Zealand. It’s lined with more than 400 volcanoes, and as the Johnny Cash song goes, it “burns, burns, burns,” which also means it’s a geothermal dream zone. 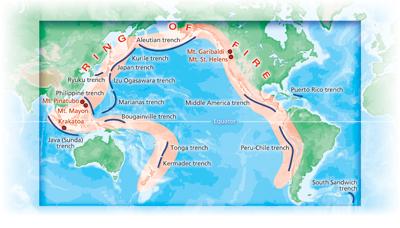 Some areas on the ring have taken advantage of the immense resources; New Zealand, for example, has developed more than 800 megawatts (MW) of geothermal capacity that accounts for about 19 percent of its energy supply, according to the New Zealand Ministry of Economic Development. But on the other end of the horseshoe in South America, geothermal energy remains largely untapped, leaving what Pierre Audinet, clean energy program team leader of the World Bank’s Energy Sector Management Assistance Program (ESMAP), calls an “open frontier.”

“South America has an enormous perceived potential. And there is a nascent desire of many governments to actually get that potential to become a reality,” explained Audinet. “But it is still not completely straightforward for a variety of reasons.”

While many countries to the north, such as Mexico, are slowly putting geothermal projects online, South American regions are lagging behind for a variety of reasons — some easily recognizeable, some not.

It is widely known that a major barrier to geothermal development, no matter the location, is the cost of test drilling. This is by far the most expensive step in the development process, and many projects struggle to secure financing due to its high risk. Approximately 50 percent of test drilling produces negative results — zero geothermal activity — so many commercial banks are very unlikely to finance these projects. Therefore, much of the development in Latin America, and even countries in eastern Africa where development is blossoming, has been led by the private sector, according to Audinet.

While governments have already handed over geothermal concessions to those private developers to move ahead, “it’s not as if you have a million private sectors with deep pockets able to shell out initial important capital expenditure to do the test drilling,” said Audinet. There are very few developers that are able to take on these costs, so many are now simply sitting on concessions, bringing the industry to a stand-still. And in some cases, explained Audient, the cost of test drilling is even more expensive because the equipment mobilization costs, such as bringing drilling rigs to those areas, are very high.

“You end up having hefty capital expenditure just to drill a couple of wells and verify your geothermal source,” he said. “It is a tough world nowadays for financing. There are talks, appetite, desire, and competent players, but it will take time.”

Slowly governments are increasingly realizing that they need to step in, but so far they haven’t been able to figure out how. “It is still very much in the open,” said Audinet. “There are countries where it is still a blank slate.”

In Chile, for example, the government is trying to figure out how to channel some type of subsidy or support to private developers. It recently announced a new renewable energy target of 20 percent by 2025 (excluding hydropower), up from the previous 5 percent goal. However there are legal and budgetary constraints in the way of achieving the target. Everything is left to the private sector, from generation to transmission, which makes it difficult for the government to step in, said Audinet. “They have straightjacketed themselves into private sector development, which can be very good, but in other ways can be a limitation when dealing with a massive financial hurdle,” he explained.

Unfortunately, there is no “silver bullet” policy for geothermal development. “We wish you could put in a FIT [feed-in tariff] and everything would move along, but unfortunately it doesn’t work like that for this technology,” said Audinet.

Adding to the financial pressure, there are also some environmental concerns for geothermal development. Some of the projects that are being planned, and even some existing plants planned for expansion, are located in national parks. Other viable areas for development may exist on lands where there are indigenous people. This creates additional developmental hurdles and longer lead-times. According to Audinet, “these constraints could change as regulations evolve, but it is more work now.”

In 2012, Alterra Power Corp., a geothermal developer based in Canada, announced a partnership with Energy Development Corporation (EDC), a Philippines-based geothermal developer, to pursue six of Alterra’s geothermal concessions in South America. One of which, its Mariposa project in Chile, is moving along and could be online by 2017.

“This transaction represents a significant step forward for our geothermal assets in Chile and Peru,” said John Carson, Alterra’s CEO. “EDC is a strong partner with deep expertise, and we’re pleased to be making this next step together.” Indeed, EDC has significant geothermal development experience on the other side of the ring of fire, with several plants online in the Philippines. The Alterra-EDC partnership will provide the necessary cashflow for test drilling at the Mariposa site. EDC will contribute $58.3 million for a 70 percent stake in the project. Alterra has already identified geothermal potential of more than 300 MW at the site, but further drilling is required to test for plant permeability.

Enel Green Power Latin America also has its sights set on Chile, and formed a partnership with Empresa Nacional de Petróleo (ENAP), the National Petroleum Corporation in Chile, to develop its geothermal assets. In August, it signed a $100 million loan with Chile’s Banco de Credito e Inversiones to be disbursed before 2014 in order to develop its renewable energy investments in the area.

In early 2013, the World Bank announced that it would establish a $500 million fund to help develop geothermal concessions around the world. According to Audinet, the program has started to allocate money to help identify test-drilling projects, and is zeroing in on Latin America “more than other regions,” he said.

“We are helping to identify a pipeline of test drilling projects and helping to lobby and call upon all development banks and donors interested in geothermal to prioritize more money towards test drilling,” said Audinet. “That is where the money needs to go if we want to unleash that geothermal potential.”

Since geothermal projects have long lead times and can take up to a decade to complete, Audinet doesn’t expect many megawatts to come online in the next few years. However, he does expect a spike in activity.

“All I can say is that you have a gradual positioning of players, including financial institutions like the World Bank, InterAmerican Development Bank, and CAF (a Latin American development bank), that are conversing on ways to approach projects and move forward,” explained Audinet. “These are conversations that started in the past 10 months so from that I would imagine that some things would eventually emerge.”

Image: A map of the Ring of Fire, an area of high volcanic activity via CIA World DataBank.