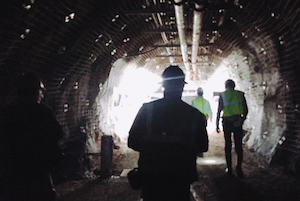 The Homestake Gold Mine in Lead, South Dakota, was once the largest and deepest gold mine in all of North America. It produced approximately 41 million ounces of gold during 126 years of operation. In 2002, the mine was shuttered when the gold veins vanished. Then, after pumping and maintenance costs increased, the Barrick Gold Corporation let the mine slowly fill with water.

Mining efforts left behind more than 370 miles of tunnels down to 8,000 feet below the Earth’s surface. Named the Sanford Underground Research Facility, or SURF, since 2006, these tunnels house the deepest underground research lab in the U.S.

The mine is topped by a campus on the surface, offering researchers administrative support, offices, and educational and public outreach facilities. Below the campus, the tunnel complex and research projects are reached via two shafts containing hoists, power, and data connections.

How It Became a Research Facility

In 2006, the Barrick Gold Corporation donated the property to the state of South Dakota for use as an underground laboratory, and the site is currently run by the South Dakota Science and Technology Authority. Research projects since 2006 have included the National Science Foundation’s Deep Underground Science and Engineering Laboratory (DUSEL), Lawrence Berkeley National Laboratory’s (LBNL) Large Underground Xenon (LUX) experiment, and Majorana Demonstrator experiment.

Beginning this year, LBNL is leading a new geothermal research project at the mine, dubbed “Collab.”

The Geothermal Research Itself

In nature, the presence of hot rocks, permeability, and fluid underground creates natural geothermal systems. Small underground pathways conduct fluids through the hot rocks, carrying energy in the form of heat through wells to the Earth’s surface when the conditions are just right. At the surface, that energy drives turbines and generates electricity. Sometimes conditions are not perfect for geothermal systems; rocks are hot, but they may not be very permeable and contain little water. This is where Enhanced Geothermal Systems (EGS) come in.

We can actually inject fluid into the low-permeability, fluid-poor hot rocks to enhance the size and connectivity of fluid pathways. Once created, “enhanced geothermal systems” function just as a natural geothermal system does, and we can access and use that stranded heat.

Now comes “The Collab.” LBNL is partnering with seven other DOE national labs and six universities to develop field experiments focused on understanding and modeling rock fractures, an essential element of EGS. With this research, they could help unlock 100-plus gigawatts of EGS potential.

Currently, the scientists are toiling away in their underground lab. After months of planning exactly where to conduct their experiments with 3D models, they are drilling eight holes into the mine’s walls and extracting and characterizing rock samples. They are gearing up for their big experiments scheduled for Spring 2018, so stay tuned for lots more progress in the next few months.