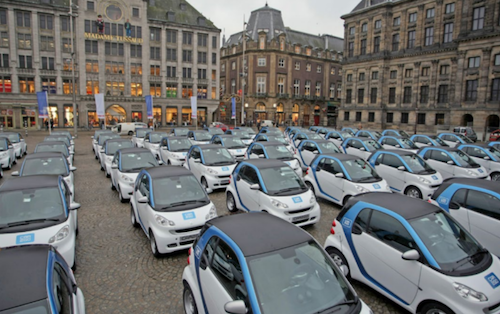 Amsterdam, The Netherlands — Speedily reducing a city’s greenhouse gas emissions (GHGs) to protect the climate may sound straightforward. Amsterdam’s experience as a front-runner in the global race to reduce GHGs, however, reveals that the process can be challenging.

To achieve its sustainability plans, the city is collaborating and seeking agreements with local industries, supply chain managers, real estate developers, as well as its bus and taxi companies. It has also established a revolving Sustainability Fund of almost €50 million (US $53.3 million) in addition to its existing €40 million (US $45 million) Climate and Energy Fund.

The city government in 2007 had planned to be energy-neutral by 2015, but not enough money was allocated to retrofit the hundreds of city-owned buildings that produce 29 percent of municipal CO2-emissions.

The city was also short on cash for replacing 110,000 streetlights with dimmable LED-lights. Progress toward the energy-neutrality goal has increased since last year, however, and the municipality is now on track to reduce its emissions by 45 percent in 2025 (compared with 2012).

The city is planning on an 18-MW increase in its installed wind power capacity by 2020―up 27 percent over current levels. The city also had planned to increase its solar generating capacity to 25 MW by 2016, but it is only at 16 MW. And whereas the city was going to drive 2016 per capita energy consumption down by 15 percent, it has only managed to reduce it by six percent relative to 2013.

To stimulate electric vehicle (EV) demand in order to reduce air pollution, Amsterdam is increasing the number of its public EV charging stations from 1,000 in 2013 to 4,000 by 2018.

Whereas the city’s taxi and bus companies originally were strongly opposed to the city’s climate and energy program, the city has successfully enlisted their cooperation. All taxis within the city will have to be electric by 2025. The municipal bus company will have all-electric bus transport citywide by 2025.

Amsterdam will also increase the number of freight transfer hubs on its outskirts. There, gasoline and diesel-powered commercial vehicles will transfer cargo to low-emission or zero-emission vehicles to reduce the number of delivery trucks in the city.

Amsterdam’s solid waste is burned in an incinerator to produce heat and power for the city. The electricity goes into the grid, and the heat is distributed to residential and industrial customers. Over the seven years from 2013 to 2020, the city intends to increase the number of participating homes from 62,000 to 102,000 and to increase the percentage of the city’s separated solid waste to 65 percent in 2020.

Between 2013 and 2020, the city will provide an €8 million (US $9 million) subsidy to one of the city’s public housing corporations to retrofit 1,000 apartments to a zero-net-energy standard, encouraging other building owners to follow suit.

As Amsterdam spokesman Peter Paul Ekker put it, in Amsterdam, there is unanimous support for greening the city and making it more sustainable, “especially since we now also see that it brings new jobs, new wealth, [and] new business opportunities.”