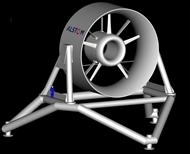 Nantes, France Alstom has inaugurated the new premises of Alstom Hydro’s ocean energy activities in Nantes, France. Alstom marked the occasion by revealing the characteristics of Beluga 9, the group’s tidal electricity-generating turbine, which will undergo its first tests in 2012, in Canada’s Bay of Fundy.

Created in 2009 when Alstom signed a technology-licensing contract with Canadian company Clean Current, Alstom’s ocean energy business will benefit from the skills of the Alstom group, a world leader in hydroelectric equipment, accounting for 25 percent of global installed hydropower capacity, a press release states.

Philippe Cochet, senior vice president, Alstom Hydro and Wind, said: “There is a considerable potential market for tidal energy, estimated between 50 and 100 gigawatts (GW) worldwide, of which France and the United Kingdom account for 10 percent. Tidal energy has some unique advantages. It is, for example, possible to predict the amount of energy that will be produced with complete accuracy, and tidal turbine generators are completely invisible once they are submerged. We are now entering an industrialization and testing phase that will enable us to respond with a reliable solution as soon as the first calls for tenders appear.”

Alstom’s ocean energy activities will be located on the island of Nantes (Ile de Nantes) – historical site of the French shipyard industry – under the direction of Philippe Gilson, Alstom Hydro’s ocean energy manager. The role of his team will be to design, manufacture and market a new generation of tidal turbine generators that can produce electricity from tidal currents.

The 1-MW Beluga 9, intended for very powerful currents (up to 4.5 meters per second, or 9 knots, on the surface during spring tides) will be Alstom’s first tidal turbine generator. Once mounted, it will have a diameter of 13 meters and a total height of 20 meters, the equivalent of a six-storey building. It will be suited to sites at depths of 30 meters or more, such as in the English Channel.

In addition, the Nantes division has just begun preliminary studies for the development of a second model, intended for sites at greater depths where the tide is less powerful.

Gilson said: “Our global launching-ground for ocean energy had to be in an area where there was a concentration of skills in marine activities, and that could serve France and the United Kingdom as a priority. By establishing ourselves on Ile de Nantes, we will benefit from nearby testing facilities, such as the Ecole Centrale de Nantes’s towing tank and wave tank, as well as from an industrial environment that is particularly advanced in areas of mechanical and electrical engineering, and naval construction.”

If all suitable underwater locations were equipped with tidal generators, it would be possible to generate 100 TWh of electricity annually: enough to supply power to 20 million households in Western Europe, Alstom said.