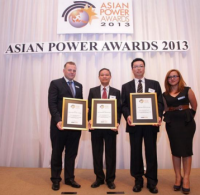 ONG, Vietnam — Alstom Power and Electricity of Viet Nam have won a trio of awards for their work on the 2,400-MW Son La hydropower plant.

Son La‘s “Hydro Power Project of the Year”, “Fast Track Power Plant of the Year” and “Power Utility of the Year” honors — presented at the Asian Power Awards 2013 ceremony in Bangkok, Thailand — were given based on the project’s innovation, effectiveness and dynamism, Alstom said.

“We are proud to be part of this great success,” said Yves Rannou, general manager for Alstom’s hydro business in China.

The plant is located on the Da River in Vietnam’s Son La province. The project includes six turbine units that combine to produce about 10% of the country’s total power, making it the largest hydroelectric facility in southeast Asia.

Alstom said Son La served as a showcase for its global capabilities, with hydraulic test models built at its center in Grenoble, France, and manufacturing handled at its facility in Tianjin, China.

“Winning the awards was made possible by the excellent teamwork and close cooperation between EVN, Alstom Hydro China, Alstom Vietnam and our partners.”

Work on the US$2.5 billion project began in 2005. HydroWorld.com reported its last turbine was put into operation in October 2012.