Those are numbers from the most ambitious of the European Wind Energy Association’s (EWEA) development scenarios, but they tally with figures from a European Commission (EC) communication from 2009. Exactly how accurate they turn out to be is not the point – for the overall trend is clear: wind power is going to be delivering a very significant proportion of Europe’s electricity in the coming decades. Post-2020, almost all new development is likely to be offshore and that is going to require a radical change to Europe’s power grid.

The anticipated large offshore power stations will often be far from the centres of demand, so transmission will be needed to connect them. But it’s more complex than that. At the moment, almost all – 95% – of electricity generated in Europe is used in the same country that it is produced in. The trans-border nature of the new grid connections, along with revisions to power market regulations, will allow power to be traded freely across networks.

In particular, it will enable the wind centres that are being productive and those that are less productive to balance one another within the European system. The North Sea grid will also enable Norway’s hydro resource – which can be brought onstream rapidly – to work in harmony with the variable renewable resources to meet Europe’s fluctuating power demand with minimal recourse to expensive (fossil-based) peaking plant. And in time large quantities of solar from southern Europe – and possibly North Africa, as envisioned by the Desertec Initiative – may also come into the picture.

The signs are that policymakers, the wind industry and power transmission industry are in agreement about the vision and first steps forward. The last few weeks of 2010 saw several moves taken towards the creation of this new infrastructure.

On 3 December the next formal step was taken on the long road towards creating part of Europe’s future grid, at a meeting of the North Seas Countries’ Offshore Grid Initiative, which was formed in 2009. There, ministers from Belgium, Denmark, France, Germany, Ireland, Luxembourg, the Netherlands, Norway, Sweden and the United Kingdom – plus the EC – signed a memorandum of understanding (MoU) that commits them to delivering, by December 2012, a raft of measures on grid configuration/integration, on market/regulatory issues, and on planning/authorisation procedures. In an Annex to the MoU, the European Network of Transmission System Operators for Electricity (ENTSO-E) and its national members lent their support to the initiative.

EWEA CEO, Christian Kjaer, called the MoU ‘an indispensable step to create an offshore electricity grid, critical for developing a single European market for electricity and for allowing offshore wind farms to plug into that grid.’ The offshore grid’s proponents are clear that it will offer not only a technological solution, but a market solution that, in the words of EWEA, will ‘tear down unnecessary and costly barriers to electricity trade between EU Member States’.

The signing of the North Seas Countries’ Offshore Grid Initiative MoU came hot on the heels of the launch of the EC’s strategy ‘Energy Infrastructure Policies for 2020 and Beyond – A Blueprint for an Integrated European Energy Network’.

EU energy commissioner Günther Oettinger called the plan ‘a new European strategy for energy infrastructures’ without which Europe would not be able to meet its 2050 greenhouse gas reduction targets. He wrote in his blog: ‘Without reliable, smart and sustainable energy networks, we will not be able to reach any of our energy policy goals. And they are numerous.

By 2015, we need to have a fully functioning internal market in electricity and gas. By 2020, we will have to produce 20% of the energy we consume from renewable sources and to have 20% less greenhouse gas emissions than in 1990. We are also aiming at reducing our consumption of primary energy by 20%. At the same time, we will have to make sure that our citizens and businesses have access to sufficient and affordable energy, despite increasing import dependency for gas and oil.’

Much of Europe’s original grid infrastructure is ageing and the EC estimates that for electricity (the gas infrastructure also needs work) an estimated 45,000 km of new or upgraded lines will be needed in the next 10 years. But, says Oettinger, ‘we are also looking at the electricity highways and the other grids of the future. If they are to be ready for roll-out after 2020, we need to start working on them now.’ 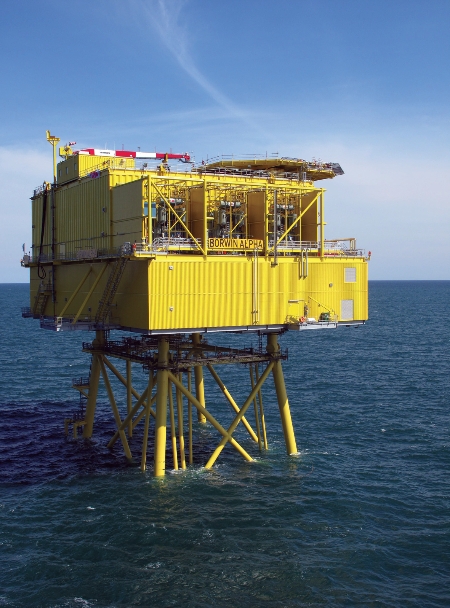 Sights like this will become more common as Europe powers up with new offshore wind capacity and a suitable grid (Source: ABB)

The EC acknowledges that until now the focus ‘has been on national markets rather than balancing supply and trade across borders in a single internal market’. Yet ‘for a truly European system we need to make sure energy from renewable sources can be absorbed into networks and that supplies are secure’.

The energy infrastructure priorities documents have four main components. First is a new method for strategic planning with a dynamic list of European priority projects that network operators will use when they plan new infrastructure. Second is more regional co-operation. ‘I mean several member states sitting around a table with their network operators, regulators and other stakeholders, and deciding together… which projects they collectively want to label as of European interest,’ says Oettinger (the offshore grid initiative would be an example).

Third comes better and faster permit-granting procedures: ‘We cannot accept any more that some electricity overhead line projects drag on for 10 to 15 or even 20 years, before a final decision is taken on the construction’. And the fourth element is a stable framework for financing: ‘We need new rules on how to share such costs and benefits equitably… We want to go beyond traditional instruments such as grants towards new innovative market-based solutions be it equity participation, loan guarantees or risk sharing facilities.’

While the plan includes gas and oil, its electricity focus to 2020 is the establishment of offshore grids in the northern seas and connections to central Europe; connections of renewables in south-western Europe; in central eastern and south-eastern Europe – to assist market and renewables integration; the Baltic Energy Market Interconnection Plan (BEMIP); and, the necessary framework and incentives for rapid investment in intelligent network infrastructure – to give choices for savings, efficiency, and integration of renewables, and accommodate new demand such as electric vehicles.

ENTSO-E said the priorities identified by the Commission are in line with those of the Pilot Ten Year Network Development Plan (TYNDP) that ENTSO-E released in June 2010. EWEA’s Kjaer cautioned that ‘the test will be whether the legislative proposals next year [2011] on financing and permitting match the scale and ambition of that vision’.

At the end of November 2010 EWEA launched a detailed 180 page report ‘Powering Europe: wind energy and the electricity grid‘, which argues that the barriers to integrating large amounts wind energy into Europe’s electricity grid are not related to technology, but rather to infrastructure and markets – a message it has been pushing for some time and which is evidently being heard by the Commission.

EWEA has calculated that there are substantial economic benefits to creating a single market in electricity and improving the infrastructure. Benefits of a better interconnected grid include a €1500 million/year reduction in total operational costs of power generation due to the increased availability of all generation capacity. The benefit of integrating 265 GW of wind into Europe’s grids by 2020 – as compared with no further growth in wind power capacity – would be a saving of €41.7 billion each year in the cost of electricity. This would bring a ‘merit order’ effect of €11 for every MWh of electricity generated – not just those MWh produced by wind turbines, says EWEA.

At present, with installed capacity of 80 GW, wind power supplies about 5% of overall EU electricity demand – though there are large regional and national differences. Various scenarios show how rapidly wind power might grow in the future. EWEA’s most ambitious projection, which would require an increase in research and a rapid rolling out of grid developments, is in line with an EC assessment that wind could supply 20% of EU electricity by 2020, 265 GW of wind power capacity (210 GW onshore and 55 GW offshore) and as much as 33% by 2030 (400 GW wind power, 250 GW onshore and 150 GW offshore).

For wind to supply 50% of EU electricity by 2050 – which EWEA believes is feasible given the right conditions – a total of 600 GW of wind energy capacity would be envisaged with 250 GW onshore and some 350 GW offshore.

These numbers indicate that, post-2020, almost all the growth in Europe’s wind sector is expected to be offshore. And that between mid-2010 (when about 6.2 GW of offshore wind were installed or under construction) and 2020, some 49 GW of new offshore wind would need to be added in western Europe. By that time, many of the early offshore wind power plants will be at the end of their operating lives and due for replacement.

Beyond the North Sea

So, the offshore grid is being planned against a backdrop of ageing transmission grids, a pressing need to shift to decarbonised power generation and to reduce reliance on imported energy sources, while allowing European electricity markets to be open and competitive. Part of the transition means the accommodation of much greater quantities of offshore wind, along with increased solar and biomass.

A series of maps in EWEA’s ‘Powering Europe’ report depict how Europe’s renewable electricity supply, and the power transmission grid, might evolve over the coming decades. It is not until the 2030 map that the North Sea offshore grid makes an appearance, connecting Norway’s hydropower resource with the wind power plants of Scotland, northern England, Danish and German Jutland, and the Netherlands/Belgium, with several connections crossing the English Channel between England and its continental neighbours.

By this time, in southern Europe, large production centres of solar power are located in Spain, Italy, southwest France, southern Germany and the former Yugoslav countries. Biomass centres are concentrated in the Baltic states and parts of southeastern Europe (focused on Hungary). In 2040 and 2050 the contribution of renewable energy increases and interconnections become much more complex.

On paper, it looks straightforward to develop a new transmission system that can accomodate new renewable energy resources. Yet no one is pretending that it’s anything other than a mammoth and highly complex task to put Europe’s future on the right lines.