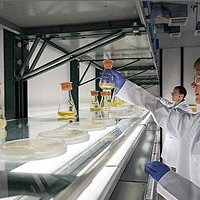 Judging by the headlines, can it be long before we’re filling our tanks with clean fuel from algae?

At NREL, researchers are accelerating efforts to identify and characterize the most promising strains of algae for fuel production. The work has resumed more than a decade after its original algae fuels program was curtailed because the fuels were considered too costly to compete with petroleum.

Today, algae fuels still are not close to being economically competitive with petroleum, according to NREL scientists. So what’s changed?

Interest at an All-Time High

And public interest is soaring after recent well-publicized algae fuel demonstrations, including airliner test flights using blends with conventional jet fuel — most recently in Houston by Continental Airlines. Some airlines and engine manufacturers hope to be using algae blends within a few years.

“I’m getting calls every day from people who want to get into algae fuels,” said Al Darzins, a group manager and principal researcher in NREL’s National Bioenergy Center. “There are hundreds of companies looking into it now here, in Europe and the Middle East.” (See image, below left, that shows one-liter flasks of algae growing rapidly under fluorescent light in NREL’s microalgae laboratory. NREL plans to grow test algae in 75-gallon batches, and eventually in small ponds under controlled conditions. Photo credit: Heather Lammers)

So is pond scum ready to replace nearly 100 million gallons of petroleum diesel and jet fuel burned every year?

Not remotely, Darzins says. Biological questions about the organisms and engineering questions related to fuel production, distribution and quality standards must be answered for algae fuels to be competitive with oil currently priced at less than $50 per barrel.

“All we’ve really seen are tests involving one engine of a jet running on a blend using a small percentage of algal fuel — and there were no passengers, of course,” Darzins said. “In my book, that’s a long way from commercialization.”

That doesn’t mean the prospect isn’t tantalizing. Algae are like microscopic factories using photosynthesis to transform carbon dioxide and sunlight into lipids, or oil. Some strains can double their weight in a few hours under the right conditions.

Algae can grow in fresh, salty or even contaminated water, can generate 30 times more oil per acre than plants used for biodiesel and other biofuels, and algae don’t compete with food crops.

Scientists think algae might grow fatter and faster if they were force-fed extra carbon dioxide, which could help alleviate the buildup of greenhouse gases. Smokestack emissions from power plants and other sources could be diverted directly into the ponds, feeding the algae while keeping greenhouse gases out of the atmosphere.

From 1978 to 1996, the laboratory was a pioneer in the field with the Aquatic Species Program. Researchers screened and characterized more than 3,000 potential strains, shed light on the growth conditions that stimulate lipid production, demonstrated open ponds for mass production of biomass, and made significant breakthroughs in genetic engineering.

Back to the Basics

Today, NREL has resumed that work, while putting a greater emphasis on understanding their basic biology. When these microalgae are starved of the nutrients they need, their lipid content can increase as much as 60%.

NREL and Chevron Corporation are working under a Cooperative Research and Development Agreement (CRADA) in which NREL is boosting microalgae’s productivity. Chevron anticipates using the resulting oil as a feedstock for renewable transportation fuels.

But not every strain contains all the qualities required to produce algae fuel — growing fast, growing fat and tolerating a wide variety of conditions.

And, different strains have evolved under different conditions in different locales. It’s unlikely, Darzins says, that one strain would be used nationwide because of regional differences in climate and water.

“We’ve only begun to scratch the surface,” said Darzins, pictured left at work in the lab (Photo credit: Heather Lammers). “We need to understand the lipid pathways and what regulates their lipid production and growth.”

Currently NREL’s algae experiments are limited to 1-liter flasks under fluorescent light. When renovations to the greenhouse at the Field Test Laboratory Building are completed, algae strains can be tested in 75-gallon batches under natural light conditions, which can be 10 times more intensive than artificial lighting.

“Some strains that look good now may not maximize photosynthesis when we scale up or expose them to natural light,” Darzins said.

Within a few years, Darzins hopes to complete construction of new outdoor ponds behind the FTLB that will test algae strains, production systems and harvesting methods at scales up to 100 acres.

Learn more about NREL research in biofuels from microalgae.