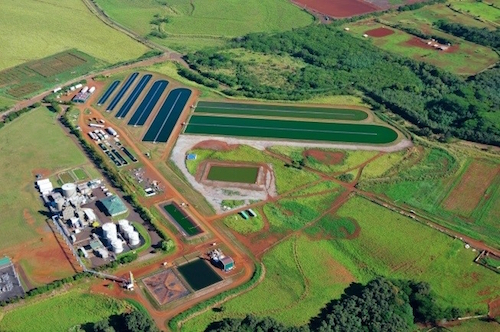 The beautiful island of Kauai, Hawaii, is known for its pristine beaches and dramatic mountain ranges. But Kauai is not just a vacation spot; it is also the location of one of the largest algae biofuel production facilities in the U.S. The entrepreneurs at Global Algae Innovations’ Kauai Algae Farm have been hard at work and making headlines for their groundbreaking advances that are lowering the cost of biofuel made from algae. The company has developed advances to ramp up the rate of algae production, with $11 million from the U.S. Department of Energy’s Bioenergy Technologies Office (BETO) since 2013. Now, the company is leading a team of public and private partners to create a process that can bring the cost of algal biofuel down to $2 per gallon.

Algae are attractive as a source of biofuel because they have a high oil yield and can grow on lands where other crops cannot. Like plants, algae can grow with carbon dioxide, sunlight, and nutrients. Algae producers cultivate their biomass and process it into oils, or “green crude,” that can be sent to a refinery to be upgraded into chemicals or transportation fuel. With enough research and development, algae biofuel could be a cost-competitive alternative for petroleum-based gasoline.

To further unlock algae’s biofuel potential, Global Algae Innovations has packed unique breakthroughs into its Kauai Algae Farm. These three breakthroughs are just a few of the many ways this company has improved algae growth and harvesting:

The Power of Gravity over the Power of the Paddle — Many algae farms are large, open ponds in the shape of an auto racetrack. These “raceway” ponds typically use paddle wheels to mix the algae in order for the algae to receive adequate sunlight and nutrients. Global Algae Innovations’ raceway ponds use a sloped design that eliminates the need for a paddle wheel. This lowers energy use and increases algae growth, which reduces costs to construct and operate the facility. This leads to lower costs of producing algal biofuel.

Algae from Concentrate — Algae growing in a raceway pond are typically dewatered before they are converted to biofuel. Global Algae Innovations invented the Zobi Harvester that can harvest and dewater algae with 30 times less energy than typical processes. This piece of equipment is now on the market, available for purchase by companies that cultivate and harvest algae to make products such as nutritional supplements and animal feed.

Global Algae Innovations has conducted this impressive work with three different BETO funding awards. In 2013, the company was part of a BETO funding award to demonstrate improvements in oil yield, and since then, it has surpassed its goals by greatly improving algae productivity. In 2015, it received funding to further its flue gas delivery system, and in 2016, the company was selected as one of three projects to improve yield to bring down costs. This fall, the company will begin work with partners from multiple national laboratories, universities, and companies such as General Electric to build on its accomplishments. With its strong team and great track record, Global Algae Innovations’ fuel may soon make it to a gas pump near you!

This article was originally published by the U.S. Department of Energy’s Office of Energy Efficiency & Renewable Energy in the public domain.